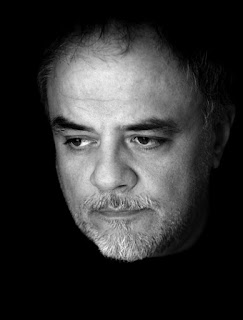 Thomas Moschopoulos
By James Karas
The Stratford Shakespeare Festival will produce a Greek tragedy this year.

That statement should merit no more than a mention in the Festival’s annual programme but it is such a rarity that it deserves a screaming headline.


The Festival has gone even further this time in hiring Greeks to direct and design the production and to compose the music for it.
Elektra will be directed by Thomas Moschopoulos who has extensive experience in directing classical and modern plays as well as opera. Most Canadians would probably claim ignorance of his work because they have never been to Epidaurus or the Athens Festival or the numerous other venues where he has worked. Millions of them, however, have seen his spectacular work as the director of the closing ceremonies at the Athens Olympics in 2004. 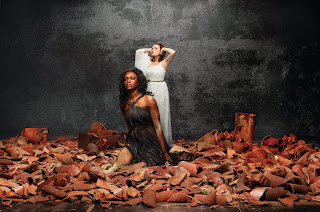 Elektra tells the story of the revenge meted on Clytemnestra and her lover Aegisthos by her children. She butchered her husband Agamemnon on his return from the Trojan War and now a vengeful Elektra is waiting for her brother Orestes to return and kill their mother.

There are three extant Greek tragedies that deal with the Elektra myth one by each of Aeschylus, Euripides and Sophocles. Why did Moschopoulos choose the play by Sophocles?
Although he had studied it, he had never directed the play before and the decision to do it came in an indirect way, he told me during a recent interview.
When Moschopoulos was invited by Des McAnuff to direct a Greek tragedy at Stratford, he came over to scout out the landscape, so to speak. He saw Yanna McIntosh and Seana McKenna and he was so impressed by their talent that he wanted to do a play in which he could use both of them. He quickly decided on Sophocles’ Elektra. And how did he decide to give Elektra to Yanna and Clytemnestra to Seana? “Instinctively” he replied. He could not give any further explanation other than an instinctive reaction to these actors.

From the numerous translations available, Moschopoulos chose Anne Carson’s rendition of the play because of its simplicity. “Greek tragedy is very economical’, he said.  And the Stratford cast is “very sensible and sensitive” to the poetry, he said.  Carson uses short sentences and colloquialisms that can be recited rapidly.
The production will have original music composed by Kornelius Selamsis. Music was an important part of Greek tragedy but we know virtually nothing about it. Moschopoulos goes back to Monteverdi and the early composers of opera for the structural ideas about the music to be used. He appreciates that there is an operatic aspect to Greek tragedy but he relies more on the Greek Orthodox liturgy and Cretan folk songs for the musical approach.

The Chorus, an utterly essential part of Greek tragedy, sings a cappella but the members do not speak in unison.  There was certainly music for the Chorus in Ancient Greece to accompany the choral odes but he has chosen not to use any in this production. There was singing during the episodes of the play (as opposed to the choral parts), according to Moschopoulos, and he will use Salamsis’s music there.  Greek tragedy appears static but Moschopoulos believes that there was considerable physicality involved. We know that the Chorus danced in the original productions and that tradition will be maintained in this staging.
The actors (but not the Chorus) wore masks in Ancient Greece but they were playing in theatres that held as many as 30,000 spectators, by some estimates. Elektra will be done in the small, theatre-in-the-round Tom Patterson. It is close enough to a Greek amphitheater in design, according to Moschopoulos and he had no difficulty adapting to it.


A few words about the Stratford Shakespeare Festival and Greek drama may bear repeating.  Tyrone Guthrie directed Oedipus Rex in 1954 and the production was reprised in 1955. A good start.
The next production of a Greek tragedy was in 1978 when what one critic called “a pointless rewrite of Medea” by Larry Fineberg was staged. Ten years later they offered a truncated version of Oedipus Rex.   Finally, in 1993, David William staged The Bacchae  and, if you are counting, that means it was the first serious attempt at Greek tragedy for Stratford in forty years.
In 1997, the 1954-55 production of Oedipus Rex was reprised and things really picked up in 2000 with Seana McKenna doing Medea.
In 2003 Stratford finally discovered Aeschylus and Aristophanes. The production of Agamemnon at the Studio Theatre tried to pretend that Ancient tragedy can be staged  like modern drama. Nikos Dionysios’s The Birds was an imaginative treatment that tried to capture the exuberance of Attic Comedy.


The last contact with Greek tragedy by Stratford was in 2008 with The Trojan Women directed by Marti Maraden. It had Martha Henry, Seana McKenna and Yanna McIntosh in the cast and left no doubt that Stratford can do a first rate job if it assigned the task to the right people.
Maybe we can start a trend.
_____

Elektra  by Sophocles opens on August 11 and will run in repertory until September 29, 2012 at the Tom Patterson Theatre, Stratford, Ontario. www.stratfordfestival.ca
Posted by James Karas at 1:51 AM