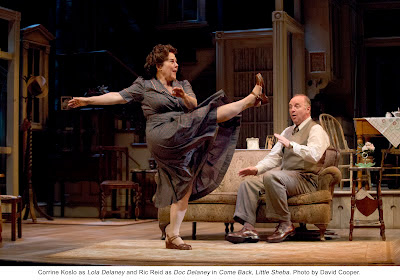 Jackie Maxwell, the Shaw’s Artistic Director, directs a sensitive, highly detailed production that builds from the run-of-the-mill of everyday life to an overwhelmingly dramatic climax.

The strength of the production lies in the extraordinary performances of Corrine Koslo and Ric Reid, ably assisted by Julia Course, Sharry Flett and Kevin McGarry.

Koslo plays Lola Delaney, a middle-aged woman who is described as old, fat and ugly. Her husband Doc (Reid) is a chiropractor and a reformed alcoholic who is helping others stay on the wagon.

The play presents the pathetic, empty lives of this sad couple by simply showing us what they do and how they live. From making breakfast, to cleaning the house, to preparing a dinner for their lodger and her visitor, we see the humdrum routine not as a part of life but as the only existence that these people have.

They lost a child and a puppy named Sheba. The child will never come back but the cute puppy might return. Waiting and calling out for the puppy is an important part of Lola’s life. For the rest, they live vicariously through the life of their lodger Marie (Julia Course). Marie dates Turk (Kevin McGarry) a muscle-bound hunk while waiting for her boyfriend Bruce (Andrew Bunker) to arrive.

Koslo has the awkward moves of the fat woman, the pitiful voice, and the fussing of someone who wants to please but simply cannot. Doc married her because she became pregnant. She tries to establish some human contact with the Postman (Lorne Kennedy), the Milkman (James Pendarves) and her neighbour (Sharry Flett) but they are all passersby except perhaps the neighbour. Koslo’s performance captures all the pathos and vacuity of Lola’s life. The nearest she comes to reality is watching Marie “making out” with Turk.

Reid’s Doc is equally pathetic. He is quiet, docile, eager to please, especially Marie with whom he is subconsciously in love. He is pathetically jealous of her relationship with Turk and goes crazy when he realizes that she has spent the night with him. He reaches for the bottle and, of course, goes into an alcoholic stupor that eventually requires hospitalization.

Drunk, the gentle Doc becomes a monster and, hatchet in hand, blurts out all the truths about his life that he has kept buried under a veneer of civility and politeness. In the end, he gives out a piercing cry that reverberates throughout the theatre in sharp contrast to the usual nothings of his life. An outstanding performance by Reid.

The supporting cast is good. Course is the manipulative blonde who will land a husband while sleeping with Turk, a more athletic and presumably better lover than Bruce (Andrew Bunker) the salesman.

The set by Christina Poddubiuk representing an old house somewhere in Middle America is excellent. The front represents the sitting room with the kitchen behind it on the side with an invisible wall separating the two. We find out that the house is a pigsty but that is not very visible.

The production has original music composed for it by Zachary Florence. Background music in movies is so endemic, that one is pleased to watch and listen to the words of a play in silence without it. Not so in this case. Florence’s music, slow and expressive, added significantly to the quality of the production.

The puppy does not return, of course, but Inge does give a resolution to the miserable lives of Lola and Doc Delaney and the Shaw Festival gives us an outstanding night at the theatre.
_____

Come Back, Little Sheba by William Inge runs in repertory from June 28 to October 19, 2012 at the Royal George Theatre in Niagara-on-the-Lake, Ontario. www.shawfest.com.