GLIMMERGLASS FESTIVAL – SINEWY AND MUSCULAR LOST IN THE STARS 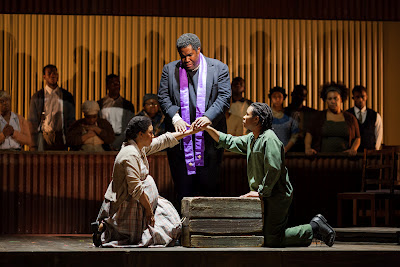 The Glimmerglass Festival has chosen Lost in the Stars as one of its “Broadway” musicals. The work is in fact a hybrid and can qualify as an opera and be at home on Broadway as well. Kurt Weill composed the music to Maxwell Anderson’s libretto based on Alan Paton’s novel Cry, The Beloved Country.

It is a sinewy and muscular work with some beautiful melodies. It is set in South Africa and deals with racism, murder, love and reconciliation.

The Glimmerglass presentation is a coproduction with Cape Town Opera and a number of the performers are South African. It is an outstanding production, beautifully and powerfully sung and dramatically moving in the highest degree.

The central character of the musical is Stephen Kumalo (Eric Owens), a deeply humane pastor in a poor, black district of South Africa. He goes to Johannesburg looking for his son, Absalom (Makudupanyane Senaooana), and finds out that he has murdered a white man during a botched robbery.

Owens, an American bass-baritone, is simply outstanding in the role. Kumalo is a large man, deeply religious, who believes in the truth. He is caught in a situation where he has to beg the father of his son’s victim for mercy and compassion in order to save Absalom from the death penalty. With his resonant voice, his moving performance, Owens gives a defining portrait of Kumalo.

American tenor Sean Panikkar is simply superb as The Leader, a type of Chorus who appears regularly and sings with astonishing authority and sonority.

Absalom’s wife Irina is played by mezzo-soprano Brandy Lynn Hawkins. She is pregnant but not married to Absalom and his father convinces her to marry him after his conviction for murder and certain execution. She is terrific. She sings with deep emotion and pathos.

One of the main strengths of the opera is its numerous ensemble pieces. The Glimmerglass Festival Chorus not only sings well but it is used judiciously to bring out the racial divide of South Africa at the tine. In one sequence, the white members of the chorus appear standing and self-satisfied while the black members are on their knees, subservient to the “ruling race”.

The set consists largely of plain panels that are moved when necessary. It is Spartan and stark but effective.

Director Tazewell Thompson has gathered an outstanding cast for this production.

John DeMain conducted The Glimmerglass Festival Orchestra and Chorus in this memorable production of an opera that is good enough for Broadway or is it the other way around?
____

Lost in the Stars by Kurt Weill (music) and Maxwell Anderson (book and lyrics) opened on July 22 and will be performed nine times until August 25, 2012 at the Alice Busch Opera Theater, Cooperstown, New York. Tickets and information (607) 547-0700 or www.glimmerglass.org