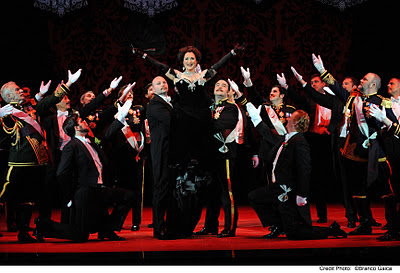 A visit to the Sydney Opera House for the current production of Franz Lehar’s The Merry Widow will convince even the most cynical that the operetta and the European debt crisis must be taken seriously. The consequences of failing to do so can be very drastic but the benefits of attending can be commensurately valuable.

We need to elaborate. Lehar’s three-act soufflé premiered in 1905 and it is one of the handful of works that define the operetta genre. The less serious-minded will note that the plot involves a beautiful, young widow named Countess Hannah Glawari who is living in Paris and is being courted by handsome young men. In this Opera North and Opera Australia production, the widow is sung by Australian soprano Amelia Farrugia. She has a lovely lilt in her voice and despite the fact that she has shown a tad too much enthusiasm for French pastries, she is decidedly worth pursuing for her vocal and acting attributes.

Those of us who are concerned, indeed worried about, the fate of Europe, the debt crisis and civilization as we know it, will note that this merry widow, whose husband had the decency to kick the bucket within days of their marriage, is loaded with enough dough to save a Balkan nation like Pontevedria. But she must marry a Pontevedrian or its good-bye happiness and hello IMF.

The solution is quite clear: impose monetary restrictions or freeze assets to prevent a run on the banks …. Oh, this is operetta. How about getting a dashing young man like Count Danilo, the Chargé d’Affaires at the Pontevedrian Embassy in Paris to marry the widow and keep the money in Pontevedria. Luckily we have Luke Gabbedy to play Danilo and he is tall, dark and handsome, and in fact looks like someone from an operetta. He swaggers and sings appropriately and he will make a perfect husband. We have a couple of hours and change to seal the match.

We need some complications to fill the time so let’s see what we can do. The European Central Bank, Goldman, Sacks and the International Monetary Fund are the sensible choices but they may not provide too many laughs. Let’s see what we can do with Baron Zeta (Robert Alexander), the Pontevedrian Ambassador to Paris. He is a bit of a dunce but he was smart enough to marry a beautiful ex-chorus girl named Valencienne (New Zealander Katherine Wiles). She wants to have an affair with the charming Frenchman Camille de Rossillon (Scottish tenor John Longmuir). Those are complications and arias we can deal with and the cast that can handle them with aplomb.

With Pontevedria ready to go under and the ECB and IMF nowhere to be seen, these people are having the time of their life. They take advantage of Lehar’s waltzes and marvelous songs; they dance, they sing. Danilo even brings some girls from Maxim’s who kick up a storm and are shamelessly entertaining.

The libretto has been translated and adapted into colloquial English by Kit Hesketh-Harvey with director Giles Havergal providing for more laughter and merriment. Under those conditions saving the economy of a small nation becomes almost impossible let alone shoring up the Euro.

Need I add that conductor Andrew Greene conducts the Australian Opera and Ballet Orchestra with verve and relish and with no thought to the economic issues facing Europe?

There is one issue that is worthy of mention. Baron Zeta or perhaps his wife Valencienne and Countess Hannah should have a word with designer Leslie Travers. The costumes are vintage haut couture. The gowns worn by the ladies express the essence of elegance and style. The men who are not in tuxes are bedecked in military uniforms with epaulettes, sashes and medals that bespeak another world. You would think you were watching an operetta.

But they need to tell Mr. Travers that the décor will not do. Those phony chandeliers will have to go. They are white, painted chandeliers on drapes that come up and down and look awful. And what are those nude statues holding light fixtures doing in a Viennese operetta set in Paris? Please, get rid of them and give us the elegance and chic that match the gowns.

No need to wait for the morning papers. Danilo will marry the merry widow; Pontevedria will be saved; the audience will have a good time; the IMF and ECB will not be required and the Euro … well, the Australian dollar is doing just fine so to hell with the Euro.
____

The Merry Widow by Franz Lehar opened on August 4 and ran until November 4, 2011 at the at the Sydney Opera House, Sydney Australia. www.operaaustralia.com,au
Posted by James Karas at 3:05 AM