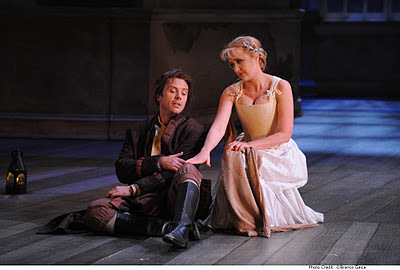 Jarvefelt has a fairly traditional approach to the opera. No tampering with the plot or egregious search for psychological byways. Mozart has provided everything and all you need is excellent singers, a superb orchestra and a director to bring out the best in one of the best operas ever composed.

The single set designed by Carl Friedrich Oberle consists of a beige room with high windows at the back and a sloping stage. There are a good number of interesting touches by Jarvefelt including the Commendatore’s coffin being left center-stage for much of the second act. The Commendatore himself emerges and stands beside his coffin near the end of the opera and it proves a highly effective way of treating the “statue”.

The singing was generally first rate. Argentinean baritone José Carbó was an agile, virile and very well-sung Don Giovanni. He is not a big man but he dominated the evening as the hormonally over-active, selfish and amoral lothario.

Soprano Teresa La Rocca has a gorgeously luscious voice and she had no difficulty expressing her distress and pain as Donna Elvira, one of Don Giovanni’s victims. She fell short of expressing her rage, however. For example, when she threatens to tear out Don Giovanni’s hear in “Ah! Chi mi dice mai” her entrance aria, there should be more rage in her voice even if she has no intention of doing anything to her lover. Other than that hers was a moving and thoroughly enjoyable performance.

Soprano Anita Watson showed a superb vocal and emotional range as Donna Anna, the woman who is (almost?) seduced by Don Giovanni. She is a mysterious character in some ways but Watson’s handling of the role is quite amazing.

The soubrette role of Zerlina is sung by Taryn Fiebig, who is indeed pretty, flirtatious and a master at handling men like her future husband, the dolt Masetto. Fiebig has that beautiful, light and almost fragile voice that threatens to crack. With Zerlina her “weakness” is her strength and she can flirt and be almost seduced by Don Giovanni and get away with it. Excellent work.

Australian baritone Andrew Jones was a suitably angry and manipulated Masetto but in dress and acting I would have preferred him to be a bit more dense. His singing was superb.
Stephen Bennett is a big middle-aged Leporello who has been following Don Giovanni and making lists of his conquests for too long and he has every right to be sick and tired of his job.

Stephen Smith has a good tenor voice but he sang a bit too pianissimo at times and was overwhelmed by the orchestra on a couple of occasions. Crank up the volume.

The costumes tended to be generally colourless. Donna Elvira does wear a beautiful red gown but the rest of the characters are not nearly as well attired. The peasant girls can be suited up in colourful costumes and I am not sure why they are dressed rather plainly.

There was a problem with visibility. A large number of people could not see the window where Donna Elvira and her maid sit and are serenaded in the second act. The problem is easily solvable by having the window at the back of the stage instead of on the side.

Don Giovanni by W. A. Mozart opened on September 24 and played until November 5, 2011 at the Sydney Opera House, Sydney Australia www.operaaustralia.com,au
Posted by James Karas at 7:51 AM