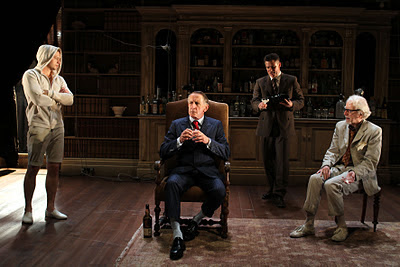 Steven Rooke, John Gaden, Andrew Buchanan and Peter Carroll Photo by Rob Maccoll
Reviewed by James Karas
Harold Pinter’s No Man’s Land opens with an unprepossessing situation. Two men are having drinks in a room full of books with a well-stocked bar. They just met in a bar but seem affable enough but we sense that there is little basis for the relationship and their attitudes will change. We will spend about 95 minutes with the two of them and we will be thoroughly confused as to who they are. That is a classic Pinteresque situation and one can see it at the Sydney Opera House in a production by the Sydney Theatre Company and the Queensland Theatre Company.

Spooner (Peter Carroll) is a gray-haired man who meets the aristocratic Hirst (John Gaden) in a bar and is invited to the latter’s book-lined home. Spooner is a bit nervous and becomes rather garrulous compared to the taciturn Hirst. The men reminisce about the past and one quickly develops serious doubts about their veracity or the accuracy of their memories.

The reserved Hirst soon tosses a glass at Spooner. The men become increasingly more drunk and their attitudes and behaviours change.

They are joined by Briggs (Andrew Buchanan) and Foster (Steven Rooke). Foster is ostentatiously gay and Briggs is a t-shirt-wearing tough guy who may burst out into violence at any moment. Their attitudes will change as well as the play progresses.

You never know who these people are because you can never trust what they say. Interestingly, no man’s land is defined by Hirst as a place that “does not move ... or change ... or grow old ... remains ... forever ... icy ... silent.” That may be one view of no man’s land but Pinter’s characters who occupy that land do move and change, they do grow old and are neither icy nor silent. In some ways the reverse is also true because despite what they say, we do not know who they are and under the veneer of civility, there lurk possible violence and the unknowable.

No man’s land has many other meanings including the patch of land between two armies which was very dangerous to cross or disputed property. All of these meanings can be applied to the complex memories of the characters.

Carroll manages to go through all the chameleon-like changes of Spooner with extraordinary acting agility. He dominates the play. Gaden is very effective as the patrician Hirst. Rooke and Buchanan go though some kaleidoscopic changes as well in what can only be described as bravura ensemble acting.

Hirst and Spooner are also perhaps poets and they certainly display a joyous use of the English language.

The whole thing is orchestrated by director Michael Gow who maintains the sands shifting and the audience trying to follow the changing dunes. He defines the characters in their different permutations and allows physical activity to supplement the intellectual permutations and variations as the audience tries to follow the play’s shifting sands.
___

No Man’s Land by Harold Pinter opened on November 1 and will run until December 11, 2011 at the Drama Theatre, Sydney Opera House, Sydney Australia www.sydneytheatre.com.au,au
Posted by James Karas at 5:59 AM