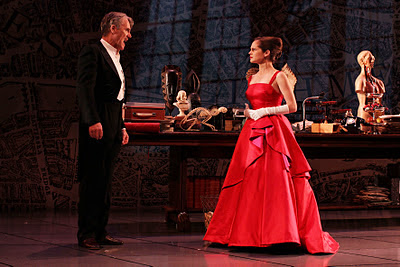 
Brisbane, with a population of more than 2 million, does not pop up on the world cultural map all that often. Sydney and Melbourne are bigger cities and have more to offer but Brisbane is no slouch. It boasts the Queensland Performing Arts Centre on the banks of the Brisbane River where you can find four halls that provide opera, concerts, major theatrical events and more intimate performances.

I was able to catch the opening night of Shaw’s Pygmalion in the 850-seat Playhouse in a production by the Queensland Theatre Company directed by Michael Gow. It proved to be an uneven success with some strengths and some questionable directorial choices.

Pygmalion is, of course, the source for My Fair Lady and it is fair to say that far more people have seen the musical than Shaw’s 1912 “Romance in Five Acts.”

Most directors tinker with the text of the play but Michael Gow has done a bit more than is strictly necessary. First, he adds a narrator who tells us where the play is set. This is normally indicated by the dialogue or by stating in the programme where each act takes place, At QPAC, a programme costs $10.00 and perhaps not everyone buys one. Having someone walk across the stage telling us where we are is not an acceptable solution. Hand people a cast list with the rest of the information.

Gow and Designer Stephen Curtis have replaced Prof. Higgins’ book-lined study and Mrs. Higgins’ elegant drawing room with a map of London at the back and a few pieces of furniture. The map has markings like Oxbridge, Cockney and Establishment as well as the names of actual areas of London. This may be a reflection of the budget available for sets and one must be sympathetic but one must also note that it is an unsatisfactory solution. The sets take away a great deal from the play.

The acting was uneven. Melanie Zanetti was a spunky, almost too spunky, Eliza who hides under the table in Higgins’ study at one point. Her nerve however is what she needed to attempt to get out of selling flowers on the street.

Robert Coleby had the ease and self-assurance of the upper-crust gentleman who can afford to be rude and crude. My complaint is that he spoke too quickly at times and did not enunciate sufficiently. A professor of phonetics who would teach a squashed cabbage leaf beautiful English would be more emphatic in his enunciation.

Colonel Pickering is a rich and sophisticated gentleman and older than Higgins. He is a true “gentleman” in manners and in heart. In the hands of Bryan Probets, Pickering looked like a geek who lacked any self-assurance and despite his Cambridge education sounded as if he needed a few lessons in phonetics from Higgins.

Chris Betts was a convincing Alfred Doolittle, the poor dustman who philosophizes about life and drinks as much booze as he can bum from others. Betts convinces us that Doolittle can become a cabinet minister or a preacher if he could change his accent.

The other actors were competent but Gow let some of them overact and went for the cheap laugh when some restraint would have been more appropriate.

The big punch line of the first production of Pygmalion was Eliza’s reply to the question if she was going to walk. “Not bloody likely” she replies and Western civilization almost collapsed. Try getting a laugh out of that line today! Michael Gow finds a solution: “Not f...g likely” blurts out Eliza and the audience roars.
___

Pygmalion by Bernard Shaw opened on November 7 and will run until November 27, 2011 at the Queensland Performing Arts Centre, Brisbane, Australia

www.queenslandtheatre.com.au/
Posted by James Karas at 7:39 AM