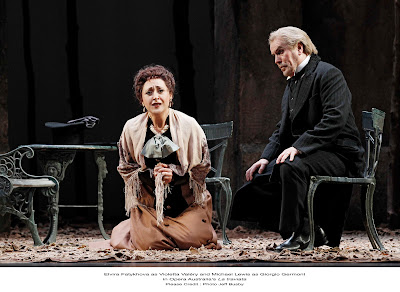 Opera Australia has the good fortune and the intelligent planning to present its productions in two major cities and two magnificent opera venues: The Sydney Opera House and Melbourne’s Arts Centre.

I caught a lavish production of La Traviata on the opening night of its performances in Melbourne. It is a magnificently designed production and superbly directed by Elijah Moshinsky. The singing was generally very good with some excellent performances and some gaps.

Russian soprano Elvira Fatykhova sang the title role and in the end gave an extraordinary performance. Her “Addio del passato” near the end of the opera is sung and acted with heart-breaking pathos. Indeed her final scene should not leave a dry eye in the house. That height is not achieved throughout the evening. Her performance was at times uneven and there were moments when she came frightfully close to being drowned out by the orchestra.

At the beginning I thought that she simply did not have a big enough voice and the rather large opera house (seating capacity 2085) was going to swallow her vocal prowess. It did not and in the end she proved her mettle but she and the conductor need to do some fine tuning.

Tenor Aldo Di Toro had some fine moments as the lover Alfredo Germont but he had to strain for the high notes and I was not always thrilled with his singing.

The most impressive and consistent performance was given by Michael Lewis as Giorgio Germont, the man who must tell Violetta to leave his son in order to save the family’s honour. He has to convince his son Alfredo as well and in each case he appeals to higher emotions, love and duty. Lewis does marvelous vocal work and is also emotionally convincing. His scenes with Violetta and his son are superb.

Director Moshinsky and Set Designer Michael Yeargan have put together a detailed and plush production that works superbly. The set for the opening scene in Violetta’s house is plush with heavy drapes, gorgeous dresses (designed by Peter J. Hall) and furniture and furnishings of convincing authenticity. When the lights need to be dimmed, a servant with a long candle snuffer appears!

A set of similar lavishness is used for the ball in Flora’s house with appropriate variations. In both instances, the places look a bit crowded but I think it is more appropriate thus than to present us with a set that looks like the grand ballroom at the Ritz. These courtesans do quite well but keeping their success within reasonable bounds is advisable.

For the second act scene in the country, Moshinsky places us outside Violetta and Alfredo’s house in the autumn. There are some denuded trees and the leaves are falling. This is preferable to having an indoor scene in a room with little furniture with Alfredo singing about how happy he is and then realizing that Violetta has sold the furniture because they are broke. A fine touch by director and designer.

For the final scene we return to Violetta’s apartment in Paris where all the furniture is gone and we are treated to the very dramatic and moving death scene and a truly fine night at the opera.

Orchestra Victoria and Opera Australia Chorus were conducted by Marko Letonja in an exemplary performance.
____

La Traviata by Giuseppe Verdi opened on November 16 and will run until December 17, 2011 at the Arts Centre Melbourne, 100 St. Kilda Road, Melbourne, Australia. www.operaaustralia.com,au
Posted by James Karas at 6:19 AM