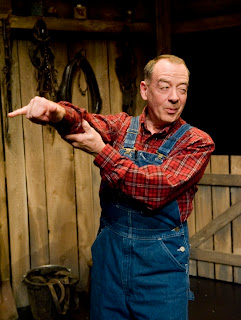 
Walt Wingfield is a Canadian institution. He is the stockbroker who became a farmer in Persephone Township, somewhere in Southern Ontario about twenty-five years ago. Well, 1985 is when Letter from Wingfield Farm premiered and Walt’s letter writing to the local newspaper and hilarious and touching attempts at farming began. They have not stopped.

Walt Wingfield is the creation of writer Dan Needles and actor Rod Beattie who, directed by his brother Douglas Beattie, has brought him to life across Canada. Wingfield Lost and Found, now playing at the Panasonic Theatre in Toronto, is the seventh incarnation of Walt and, it bears repeating, another appearance of a Canadian institution.

What is happening to Walt these days? He still works on Bay Street a couple of days a week and tends his very problematic farm the rest of the time. He has celebrated the third anniversary of his wedding and has a lovely daughter named Hope and the old assortment of colourful neighbours is still there. It is quite a collection of people and animals and they all come to vivid life during the evening.

As you may have gathered or should know the Wingfield plays are one-man shows. But you would never know that if you listened to a recording of the show or even watched it in the theatre. The supremely talented Beattie modulates his voice, makes facial expressions and changes in body postures and accent so that he sounds like at least half a dozen distinct and memorable people – and a dog.

The current show consists of a number of sketches of life on Wingfield Farm and its attendant problems. Walt buys some cows that are supposed to be docile but they turn out to be Olympic sprinters and jumpers as they hop over fences and scoot around the neighborhood. The neighbours get together to find and catch the errant animals.

There is a nest of bees in the ground and Walt must get rid of them using an ecologically friendly method (hot water) instead of chemicals. He discovers the efficacy of baking soda in treating stings and burns. There is also the red-tailed hawk who is lunching on Walt’s chickens. The hawk is not supposed to like chickens and Walt cannot shoot it because it is a protected species. Leave it to Mrs. Wingfield to find a solution – chickens are also protected birds!

The connecting links of the sketches are the drought that has befallen the Township, the search for water using witching doctors, discovering the identity of a tune that everyone is humming and finding Mrs. Wingfield’s bracelet. All of these things are “lost” and order and equilibrium are restored in the lives of the residents of Persephone Township when these things are “found.”

Beattie’s incredible characterizations are there and Needles’ wry humour and other-worldly setting is entertaining. Even though Walt has become ecologically aware and he speaks of Kyoto and the environment, Persephone Township and its people are a long way from downtown Toronto or downtown Anytown.

What Wingfield Lost and Found does not deliver is the huge guffaw. There were some close calls but there was no comic build-up to the punch line that has you almost doubled-up with laughter. The other Wingfields were funnier or it may be that memory is playing tricks on me. The sun was warmer and summers more wonderful 25 years ago and the Wingfield plays may be like times past, better in memory than in reality. This Wingfield did not seem as good as some of the previous ones.

But the credit remains. Needles and the Beattie brothers have created a world in Persephone, a comic institution in Canada and some wonderful evenings in the theatre. Now that is an achievement.

Wingfield Lost and Found by Dan Needles will run until January 30, 2011 at the Panasonic Theatre, 651 Yonge St. Toronto, Ontario. www.mirvish.com
Posted by James Karas at 10:10 AM