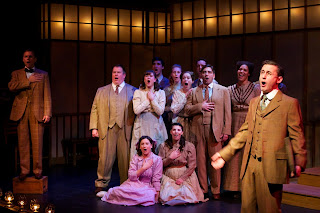 A few years earlier, McReynolds’ strain of anti-Semitism was displayed with more deadly results in the case of Leo Frank who was accused of murdering a young girl in Atlanta, Georgia and convicted on trumped up evidence largely because he was a Jew.

Playwright Alfred Uhry and composer Jason Robert Brown have written Parade, a musical about the Frank case and it is now showing at the Berkeley Street Theatre Upstairs in a production by Studio 180 and Acting Up Stage Company and directed by Joel Greenberg.

Leo Frank was a Jew from Brooklyn and his uncle gave him a job as a supervisor in a pencil factory in Atlanta. Memories of the Civil War were still fresh in the South and racial bigotry, religious fervour and intolerance were the rule rather than the exception. The “parade” of the title is the celebration of the Civil War that Southerners observed - a war that they lost, as Frank ruefully observes.

In April 1913, Mary Phagan, a 13-year old worker was found dead in the pencil factory. Suspicion fell on the black janitor and the Jewish supervisor. What followed was not just a travesty of justice but a frenzy of hatred and bigotry that staggers the imagination. Frank was convicted and all his appeals were refused. When the Governor commuted his death sentence to life imprisonment the good citizens of Georgia took the law into their own hands and lynched the hapless Frank.

That is the dramatic story on which the musical is based. Fifteen actors take on more than several dozen roles as the writers explore the events in Frank’s life from the last time that he saw Mary Phagan to the time that a noose was placed around his neck.

The music is played by four musicians on a guitar, a banjo, a cello and percussion instruments. They provide surprisingly rich sound. Much of the singing is accompanied recitative. There are some powerful moments that are accentuated by the music but many of the numbers do not gain from having music in the background. The ensemble pieces are much better and more expressive.

Michael Therriault is an effective and well-done Frank. He is thin, wears horn-rimmed glasses and rubs his hands when he talks. He is a Jew from the North and must be guilty, some people conclude. His wife Lucille (Tracy Michailidis) is a strong woman and a faithful Southerner who fights for her husband and is able to bribe where necessary and eventually sow some doubt in the Governor’s mind.

Most of the rest of the cast take on several roles and form part of the ensemble. Not all of them can sing and in some instances such as the giving of evidence in a recitative, the play is ill-served. I was reminded of the story of the famous Russian ballerina Pavlova who was asked by an admiring fan “what does it mean” after watching her perform. “If I could have said it, I wouldn’t have danced it” she replied. In the case of parts of this musical, they could have been said a lot better than they were sung.

That does not take away from the force of the story and the musical.

Parade was first staged at New York’s Lincoln Centre in 1998 and it won Tony awards for best book and score as well as Drama Desk and New York Drama Critics’ Circle awards as best musical. It was produced as a large scale musical with the attendant large scale costs. The current production is a scaled-down version of the musical done with four musicians on a single set with a lot of doubling up by the actors. It gains in intimacy in the small Berkeley Street Theatre Upstairs but does lose in grandeur.

Parade is a great reminder of the force of bigotry that, for all our hopes, frequently rears its head even in Canada. Perhaps no one would dare do what Justice McReynolds did or act as he acted. Perhaps, but it was not that long ago that when a lawyer asked an Ontario Superior Court Judge for an adjournment because of a Jewish holiday, the judges remarked “Are you one of them?”

Justice Brandeis and Leo Frank would have known what he meant.
____

Parade by Alfred Uhry (book) and Jason Robert Brown (music and lyrics), presented by Studio 180 and Acting Up Stage Company, opened on January 3 and will run until January 22, 2011 at the Berkeley Street Theatre Upstairs, 26 Berkeley St. Toronto, Ont. (416) 368-3110. www.paradethemusical.com
Posted by James Karas at 3:32 PM