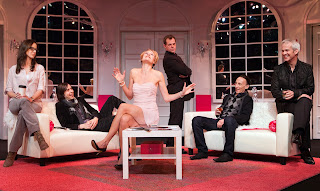 Moliere’s The Misanthrope is one of the masterpieces of world drama and it is mentioned in the same breath with the plays of Aristophanes, Shakespeare, Shaw and Wilde. It has been translated into English numerous times and often set in places other than 17th century Paris.

The current production at the Tarragon Theatre is a wonderful re-imagining of the play by English playwright Martin Crimp. It is a “version” as opposed to a mere translation. Crimp places the play in late 20th century London where the artistic community of that city deliver the translated rhyming couplets.

Crimp changes the names of all the characters except Alceste the misanthrope. They are, of course, acting like modern English people rather than the French upper class of Louis XIV.

This version was first presented by The Young Vic Company in 1996 and it is the first time that it is being seen in Toronto.

The production, beautifully directed by Richard Rose, is fast-paced, well-timed and except for some glitches works marvelously well. The central figure is Alceste (Stuart Hughes), who espouses high morals, believes in complete honesty and despises cant and hypocrisy. His friend John (Patrick Galligan) espouses a more practical morality and tries to be more rational and accepting of human weaknesses. He tries to convince Alceste to be less categorical in his condemnation of humanity.

Alceste is in love with a shallow, fun-loving American actress named Jennifer (Andrea Runge) who does not share his high moral standards. When Covington, a reviewer, played by David Storch, visits Alceste to show him a play that he has written and promises to write favourably about him, Alceste snubs and offends him.

As fate would have it, Jennifer falls in love or at least has an affair with Covington. What can be worse than someone you love having sex with someone whom you hold in contempt?

The world of these people will unravel when Ellen writes a story based on an interview with Jennifer. The latter ridicules all of them and as a result appears to be left with no friends. Loyalty is not a prized quality when promoting one’s career.

Alceste, in turn, drops all his fulminations about hypocrisy and morality and is willing to take Jennifer back provided she renounces the world. She is not prepared to go that far and Alceste storms off the stage as the others continue with the party.

The rhyming couplets are handled reasonably well, the pacing is superb and the overall effect is highly entertaining. One can take issue with the English accents which most of the actors simply could not do. Runge does not have to try because she is an American.

The strongest and most delightful performance is turned in by Giroux in the relatively minor role of Ellen. She is simply hilarious as the world-weary reporter who ends up betraying Jennifer’s confidence in order to further her career. The slim, highly attractive and very sexy Andrea Runge is a perfect Jennifer: a bit ditzy but no fool.

Hughes fulminates as Alceste and Galligan provides the counterweight as the two give very fine performances. McGibbon and Richings can overact with delightful, results and equally high marks go to Storch as Covington.

There was some annoying music between scenes and the ending was unsatisfactory. In this regard I am simply prejudiced by Tony Harrison’s version in which Celimene (Jennifer) is left alone on the stage, abandoned by her “friends” in a very effective scene. The original play simply ends with Philinte/John running after his friend Alceste in order to change his mind. Alceste takes off with the intent of abandoning civilization.

Director Richard Rose does a wonderful job for most of the platy but does not provide a more than just satisfactory ending.

It should be noted that Moliere and classical comedy are not natural denizens of the Tarragon. The Misanthrope replaces Kent Stetson’s The Harps of God, a Canadian play that was originally scheduled for this time slot. The good news is that the Stratford Shakespeare Festival will also stage The Misanthrope this summer, directed by the inimitable Brian Bedford.
______

The Misanthrope by Moliere in a version by Martin Crimp opened on January 6 and will continue until February 6, 2011 at the Tarragon Theatre, 30 Bridgman Ave. Toronto, Ontario. www.tarragontheatre.com
Posted by James Karas at 2:44 PM