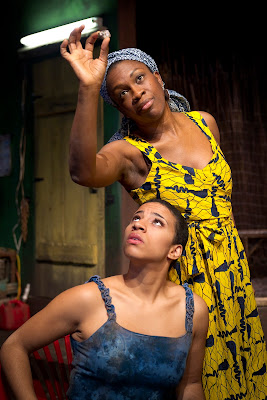 A young woman is working in her vegetable garden with her baby nearby. Her husband has gone to town to buy her an iron pot, something she has wanted for some time. It is as much a gesture of love as it is a purchase of a necessity. The scene is bucolic. Some soldiers appear and they grab the woman One of them kills the baby by crushing its head with the heel of his boot.

For the next five months the woman is tied with a chain to a tree trunk and repeatedly raped by the soldiers. When she is finally released she is rejected by her husband and the rest of the village and she becomes a prostitute.

This is only a part of the harrowing background of Lynn Nottage’s Ruined, now playing at the Berkeley Street Theatre.

The play is set in Mama Nadi’s ramshackle bar and whorehouse in the Democratic Republic of Congo. It is in the centre of a “fertile and blessed land” rich in precious minerals. It is also in the middle of the rebel and government forces who, if anything, try to outdo each other in brutality. Ostensibly, the rebels are trying to liberate the people while the government forces are attempting to restore order.

In the opening scene, Christian (Sterling Jarvis), a travelling salesman, brings two women to Mama Nadi’s bar and sells them to her. One of them is Salima (Sophia Walker), the woman who was tied to the tree for five months. The other woman is his niece Sophie (Sabryn Rock), an 18 year old girl whom Mama Nadi is reluctant to accept. Sophie is limping and is described as ruined, damaged, broken. It takes a while to realize the full meaning of these words. Sophie is far more than damaged goods - she is the victim of female genital mutilation. She cannot even be a whore and that is why Mama Nadi does not want her.

Yanna McIntosh gives an outstanding performance as Mama Nadi. She runs a bar and a whorehouse in a literal and moral jungle, situated between two brutal armies. She has to be tough and diplomatic but is also fundamentally humane. Marci T. House plays Josephine, a tough and sassy whore who has to survive by servicing the soldiers and the miners. A fine performance.

I saw the London premiere of the play at the Almeida Theatre last April and the current production suffers somewhat in comparison. The set consists of Mama Nadi’s bar with a bedroom on the far right. It is rather awkward switching scenes in the corner. The English production solved this problem by having a revolving stge.

The set and the sound effects fail to convey the feel of the jungle and the rain. The production plods along for some time until it reaches the climax of the play. This is when Salima’s repentant husband Fortune (Marc Senior) crashes in with the iron pot that he bought for her and she collapses on the ground. There are other searing emotional scenes but the most effective ones are in the last quarter of the play. In other words, director Philip Akin gets the punch line but is not as successful in the lead-up to it.

Walker and Rock provide the wrenching emotional impact of the play when faced with the brutality of the soldiers and the tough commanders of the army units played convincingly by Andre Sills as Osembenga and Anthony Palmer as Kisembe.

The play does end on a note of redemptive humanity. Mama Nadi gives up her most precious possession, a diamond, for Sophie to get corrective surgery. She also reaches out to Christian and they connect on a human level that seems to have almost disappeared in the African jungles of inhumanity.

Lynn Nottage’s play premiered at the Goodman Theatre in Chicago in November 2008. It opened in New York City in February 2009 and this is its Toronto premiere. It has won the Pulitzer Prize and an OBIE among other prizes. The current production is by Obsidian Theatre Company in Association with Nightwood Theatre.
__

Ruined  by Lynn Nottage  runs from January 16 to February 12, 2011 at the Berkeley Street Theatre,  www.obsidian-theatre.com or www.nightwoodtheatre.net
Posted by James Karas at 5:40 PM