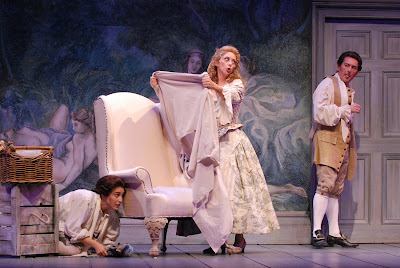 Ariana Chris as Cherubino, Nathalie Paulin as Susanna and Brett Polegato as Count Almaviva. Photo: Peter Oleskevich
Looking for opera in Southern Ontario is not exactly like looking for oases in the Kalahari Desert but neither are productions so plentiful that you feel you cannot see everything. The Canadian Opera Company offers seven productions, Opera Atelier provides only two and if you want to see more you will have to settle for some concert versions or see opera on the movie screen Live from the Met.

But there is another oasis, a scrapper known as Opera Hamilton that refuses to be deterred by budget deficits and offers two full productions and a concert version of opera favourites each year.

The production of The Marriage of Figaro was a delight. Not that there were no shortcomings and much of the credit belongs to Mozart. But director Brent Krysa invested the production with many nice comic touches (like Marcellina holding Figaro on her lap like a baby after she discovers he is her son) and maintained a good pace that in the end left you patting yourself on the back for being wise enough to see it.

Let’s start with the strengths of the production. Canadian bass-baritone Stephen Hegedus made a fine Figaro. He sang and acted well and handled the comic business with panache. His counterpart is Count Almaviva, sung by Canadian baritone Brett Polegato. Where Figaro is the clever and funny servant, Almaviva is the serious and dramatic aristocrat. Polegato was just that, thundering his notes with musical authority.

Susanna (soprano Nathalie Paulin) is the other quick-witted servant who can match and even surpass Figaro in cleverness. Paulin has a lovely voice but it took her a while to warm up. Initially I thought her voice may be too small for a large auditorium. But she settled in and did a fine job.

Canadian soprano Katherine Whyte’s Countess presented several problems. The Countess, in contrast with her servant Susanna, should be regal, even majestic. Her marriage to the count has gone stale and she is pensive and perhaps depressed because she feels that he no longer loves her. In fact the Count wants to seduce Susanna. In her beautiful first aria, “Porgi amor,” the Countess laments the loss of her beloved husband’s love and expresses her deep sorrow. The long phrases of the aria should be delivered with a majestic beauty that Whyte does not quite achieve. The same can be said of her singing of “Dove sono” where she asks where the lovely moments of sweetness and pleasure have gone.

The other issue with Whyte was simply sloppy directing on the part of Krysa. The Countess’s movements and manner should be in sharp contrast to that of her maid. Begowned and bejeweled, she should move with the gait of a princess not the quick steps of a servant. She does not.

Mezzo soprano Ariana Chris did a superb job in the pants role of Cherubino. He is hormonally overcharged and can usually be found where he shouldn’t be. Aside from some wonderful comic business he/she gets two marvelous arias, “Non so piu cosa son, cosa faccio” (I don't know any more what I am, what I'm doing) and “Voi, che sapete che cosa è amor” (You ladies, who know what love is) where poor Cherubino simply quivers with sexual excitement. Chris acted convincingly boyish and, as they say, delivered the vocal goods.

Canadian bass-baritone Daniel Lichti delivered Bartolo’s “La vendetta” aria with sonority and he and mezzo-soprano Lynne McMurtry’s Marcellina made a nice comic team of the would-be spoilers of Figaro’s wedding plans. Gerald Isaac sang the roles of Basilio and Don Curzio with a comic twang that was quite appropriate.

The set, designed by Susan Benson was functional. It was not big enough to fill the stage and when Cherubino jumped out the window we saw him scamper off to the wings. Once you get used to it you forget the stage and listen to the music and the singing.

The Opera Hamilton Chorus sounded thin at times and the Hamilton Philharmonic under the baton of Gordon Gerrard went through some uneven patches but gave an overall god accounting of the score.