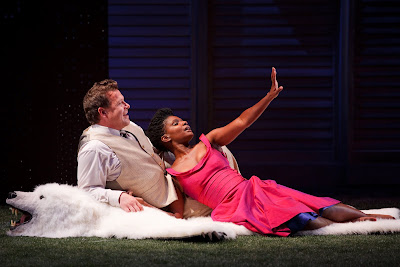 Ngozi Paul as Julia and Ashley Wright as Fernando. Photo by Bruce Zinger

Summer is over and the theatre season has opened in earnest. The professional and amateur theatre compnies have opened their intitial productions and the eternally optimistic audience has begun looking for that great production of a great play. Let’s start with a list of plays that you will be able to see in he coming months: Fernando Krapp Wrote me this Letter, The Anderson Project, Studies in Motion, Saint Carmen of the Main, The Cosmonaut’s Last Message to the Woman he Once Loved in the Former Soviet Union and Untitled.
How many of those plays do you recognize? Where are they playing?
The answer to the first question may be “none” and the guess to the second question may well be that the plays are being produced by some experimental company in a theatre that you need your GPS to find.
Would you believe, as Maxwell Smart used to say, that they make up the Canadian Stage Company’s new season at the Bluma Appel Theatre?
Canadian Stage has a new Artistic and General Director in Matthew Jocelyn. He replaced Martin Bragg who served in the post for 17 years. A Torontonian, Jocelyn has spent most of his artistic life in Europe. Words used to describe his approach are bold, innovative, trans-disciplinary and redefining. The titles of the plays alone tell us that Canadian Stage Company and the Bluma Appel Theatre may never be the same.
For his first production Jocelyn has chosen German playwright Tankred Dorst’s Fernando Krapp Wrote me this Letter: An Attempt at the Truth which he translated and of course directed. On the surface it is a simple, almost mythical story. But it is the type of play where most of the action takes place beneath the surface and in the end you are left scratching your head. This is not intended to be a light evening out for the tired businessperson.
When the play begins, Julia (Ngazi Paul) tells us that Fernando Krapp “wrote me a letter”. Julia is a poor woman who lives with her father in a city. Fernando is very wealthy and he gave some money to Julia’s father (Walter Borden) and consequently she accuses her father of selling her to Fernando. She is adamant that she wants nothing to do with Fernando.
Fernando (Ashley Wright) appears and he is not a sleazy or tough Donald Trump-type tycoon. He is a rather jolly, overweight man wearing a beige-coloured three piece suit. He is arrogant, to be sure and wants his way but he does not seem nasty at all. He marries Julia and they seem to be quite happy.
The Count (Ryan Hollyman) visits Julia and they get along quite nicely. Is Fernando jealous? No. Are Julia and the Count having an affair? No. Let’s go over the last propositions again. In a bizarre way, we will find Julia and the two men in her life in a mental hospital. She is mentally ill and Fernando and the Count are psychiatrists. Julia is cured and at home and we see the two men with her again.
The plot moves seamlessly and without any connecting logic from one point to the next. This is theatre of the absurd that make sense and no sense. As the subtitle of the play states, Fernando’s letter and the play itself may be an “attempt at the truth” but you are never sure what the truth is or for that matter what is the question. In other words, you cannot find the truth if you do not know what you are looking for and Dorst does not give you too many clues to assist you in your search.
This is theatre of questions and not answers; of “what was that all about” head scratching and a desire to see the play again or find out more about it. Perhaps that is the highest compliment one can pay to both director and author.
The real question however is if this production and the other plays on this season’s roster will bring people to the Bluma Appel Theatre. Let’s hope that it does.
______

Fernando Krapp Wrote me this Letter: An Attempt at the Truth by Tankred Dorst opened on September 28 and will run until October 16, 2010 at the Bluma Appel Theatre, St. Lawrence Centre for the Arts, 27 Front Street East, Toronto, Ontario. www.canstage.com
Posted by James Karas at 12:53 AM