YOU ARE HERE GETS YOU NOWHERE AT THE ALUMNAE THEATRE 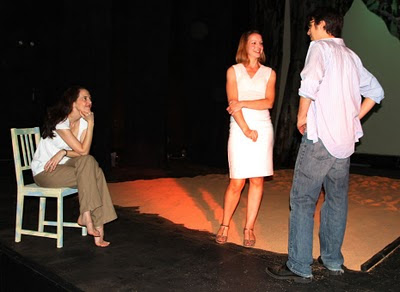 There are some plays and productions that get you nowhere. You try to find points of interest, guess the author’s intentions, the director’s point of view and come up empty-handed. The current production of Daniel MacIivor’s You Are Here by the Alumnae Theatre Company left me with such an impression. I could find nothing in the play or in the production that made the play rise higher than tolerable and most of the time it was plain boring.

The play is centered on Alison (Tabitha Keast) who should be an interesting character but is so badly developed you do not much care for her. She is an intelligent and educated journalist. She first appears on the sand-covered stage with a bottle full of sand. She filled it from the shore of the Black Sea, the cradle of civilization, and she prizes it very highly.

She meanders through her opening monologue for so long that even the flashes of literary language begin escaping you and you want her to stop jabbering and get on with the play. Whatever the symbolic significance of the bottle, we will not see it until a couple of hours later when she empties it.

We flash back to her time at university and meet Prof. Steeves (Joseph Cochrane) and Connie Hoy (Seema Lakhani). The latter is a student and a Teaching Assistant and the professor is sleeping with her. That may be improper but it is mentioned in passing only and we go on to the next scene. Alison has a good friend in Richard (Michael Vitorovich) who also acts as a kind of Chorus in the play.

Alison interviews Diane Drake (Alyssa Quart), a shallow and ditsy actress, and Thomas Rowan (Will O’Hara), an arrogant director. Alison marries Jerry (Cameron Johnson), a psychologist but leaves him for Thomas. She then goes with Paul (Jamieson Child) a gigolo for reasons that escape me. Why she married Jerry is not made clear any more than the rest of the spouse-swapping that occurs.

Jerry the psychologist becomes a screenwriter and Thomas directs the film that Alison produces. We continue, in the meantime, with the deterioration of Alison’s condition for reasons that are not apparent.

Alison addresses the audience a number of times including telling us that intermission has arrived. We are grateful. Later on Connie provides comfort by telling us that there are only a few minutes left in the play. We are relieved.

Director Paul Hardy has the eight actors of the cast walk through the sand on the stage, as they must, and no doubt they are walking through the sand of time. There are virtually no props. The pace is soporific and the pauses are so long at times that you have forgotten what preceded them. Your mind is wanders away from what is going on on stage and it takes an effort to concentrate.

The actors deliver their lines more out of duty than conviction and I have no idea why this soporific play was chosen for production in the first place.

Perhaps if Hardy picked up the pace, tightened the acting, we may get a lot more from the play. There seemed to be some good lines but all were buried in the sand on the stage and not necessarily on the historic shore of the Black sea.

A bad night at the theatre.