DAS RHEINGOLD AT THE MET: VOCALLY AND VISUALLY STUNNING PRODUCTION – IF ONLY WE COULD SEE IT 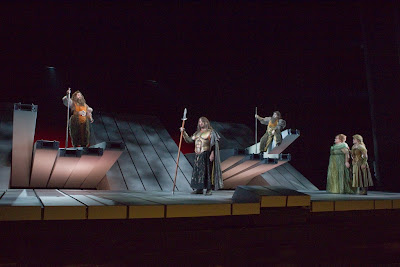 
In the spring of 2009, New York’s Metropolitan Opera staged Otto Schenk’s production of Der Ring des Nibelungen for the last time. The production had been around for some twenty years and who would have thought that its final staging would become a cultural “event”. Yet, it was.

No sooner was Schenk’s staging retired than a new production was announced for the fall of 2010, this time directed by Robert Lepage. Lepage is an extraordinary director who pushes the visual boundaries of opera beyond what we are accustomed to. His production of The Nightingale and Other Short Fables by Igor Stravinsky for the Canadian Opera Company last year gave Torontonians a good taste of his tremendous imagination.

With that type of background, expectations for his production of Wagner’s massive cycle are running high and the first installment, Das Rheingold, is already in. Mortals who are favored by the gods saw the production at Lincoln Centre. The less fortunate got to see it on a large screen in a movie theatre. We all expected a high tech approach with visual effects that should be at the very least surprising and perhaps stunning.

Needless to say, Lepage steers away from Schenk’s grandiose and traditional sets. The set that he provides, (designed by Carl Fillion) consists of a series of platforms that can be moved laterally, vertically and in every other way, it seems. With the help of appropriate lighting the result is usually amazing. The opening scene of Das Rheingold, in the depths of the river is stunning. The Rhinemaidens flap their fins and glide down a sloped platform and the impression that they are indeed underwater is marvelous.

In the scenes that follow from the top of the mountain where Wotan negotiates with the giants Fasolt and Fafner over the bill for the construction of Valhalla to the underground home of the Nibelungs, the judicious and imaginative use of lighting and moving platforms create a credible and at times exciting production visually.

The costumes, designed by Francois St-Aubin, from Wotan’s plastic breastplate, to the long gowns for the goddesses, are appropriate. The giants Fasolt and Fafner are given masses of hair and puffed up sleeves. I thought they looked more like overfed hillbillies than giants but let that be.

Unfortunately in a Live from the Met telecast in a movie theatre, you are subject to the capricious and often ridiculous choices of Gary Halvorson. He is the telecast director and he chooses the shots from close-ups to full stage views, to the angles from which we poor mortals are allowed to see the production.

His work ranges from the barely acceptable to the utterly deplorable. At the beginning there were enough long shots for us to get a sense of the staging and get the benefit of close-ups of the Rhinemaidens and the slimy Alberich. After that full views or even shots of most of the stage became rarer. There were times when we could see the character and a view of the boards and some shade of the set. The impression was that the gods were having a get-together on a shady deck in suburbia.

Let’s get to the real pleasure of the production. A frail James Levine in his 40th year at the Met conducted the Metropolitan Opera Orchestra to produce sonic splendour on, how else can one put it, Wagnerian scale. The lead singers were outstanding. Welsh bass-baritone Bryn Terfel is a magnificent Wotan. A patch of hair over one eye, a plastic breastplate and a couple of weeks of beard add up to an impressive appearance to supplement his vocal prowess.

American mezzo-soprano Stephanie Blythe was Fricka. She is supersized vocally and physically and if one characteristic may be more attractive than the other we have to accept Wotan’s choice for a spouse and just listen.

German basses Franz-Josef Selig (Fasolt) and Hans-Peter Kőnig (Fafner) are the lumbering giants who sound Wagnerian (thank god) even if they look Tennessean. America bass-baritone Eric Owens’ Alberich is slimy and scary. His acting and singing are superb and this is an Alberich to remember.

The visual effects that Lepage provides do not always satisfy. When the gods finally enter Valhalla – just a minute, where is Valhalla? As ordered by Wagner, the colours of the rainbow appear, the music soars but there is no visual representation of the grand palace of the gods. I expected something visually stunning that surpasses anything that a realistic representation could provide. It was not there. The only solution here is to one-up Lepage. Close your eyes and imagine a Valhalla more grandiose than any director can imagine or set designer devise. All you really need is the music and Levine delivers that gloriously.

What Halvorson allows you to see of Das Rheingold will be shown again in movie theatres on November 20 and 29, 2010.
Posted by James Karas at 10:31 AM