ACIS AND GALATEA IN GORGEOUS PRODUCTION FROM OPERA ATELIER 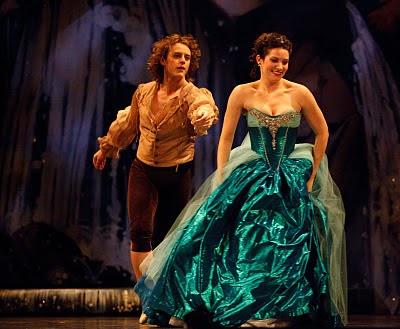 For its 25th season, Opera Atelier offers two 18th century works, namely Handel’s Acis and Galatea and Mozart’s La Clemenza di Tito. The first is playing now at the Elgin Theatre; for the second you will have to wait until April 2011.

For the 1732 production of the pastoral opera Acis and Galatea, the advertisement read that “there will be no Action on the Stage, but the scene will represent in a Picturesque Manner, a rural Prospect, with Rocks, Grottos, Fountains and Groves.”

The current production of the work by Opera Atelier pays no heed to the early advertisement and co-artistic directors Marshal Pynkoski an Jeannette Lajeunesse Zingg have produced a delightful version of the work. There is considerable humour and action on the stage in the form of dances choreographed by Ms Zingg but unfortunately very little evidence of groves and fountains. More about that later.

Acis and Galatea was first performed in 1718 and it was George Frideric Handel’s first dramatic work in English. His librettist John Gay based the wok on Ovid’s Metamorphoses and tells of the love triangle of Acis, Galatea and Polyphemus. Galatea is a Nereid, a sea nymph, one of the 50 daughters of Nereus, the god of the sea.

Somehow she finds herself in Arcadia or Sicily and the semi-divine Galatea has fallen in love with a mortal named Acis. The one-eyed, man-eating Cyclops Polyphemus is also in the same neighborhood and he has fallen in love or more accurately in lust with Galatea. (this is before he took up sheep rearing full time on the island of the Cyclops and dined on some of Odysseus’s men). Polyphemus’s father is the god Poseidon and you know things will not turn out well for the mere mortal Acis.

Acis and Galatea has been variously described as a masque, a serenata, a pastoral and a pastoral opera. It has a number of melodic arias, duets and choruses that tell the story of the love of Acis and Galatea and the fate of the mortal lover in the hands of Polyphemus. There is a fourth character named Damon who is sometimes described as a Shepherd but Pynkoski has wisely chosen to have him played as spirit. He comments on the action and is a connecting link in the plot.

The delight of the evening is soprano Mireille Asselin’s Galatea. Ms Asselin has a lovely voice, rich in tone and colour and she was a pleasure to watch and hear. She was well-matched by tenor Thomas Macleay as Acis. Handel does not require lung-stretching vocal histrionics but he does demand beauty of tone and Macleay delivers some marvelous singing.

Pynkoski has chosen to present the Cyclops Polyphemus as a comic character rather than as a straight villain. Polyphemus is larger than life and he must be either a terrifying monster or a comic burlesque of a monster. Bass Joao Fernandes struts on the stage and overacts as becomes a clownish monster and produces some laugher but he is not larger than life. His singing was good but the character needed to take a more extreme shape to be satisfactory. Tenor Lawrence Wiliford was sprightly physically and vocally as the spirit Damon and a good example of a properly conceived character.

The Tafelmusik Chamber Choir gets some of the best parts of the opera and from the opening chorus of “Oh, the pleasure of the plains” to the final “Galatea, dry thy tears” is simply superb. The Tafelmusik Baroque Orchestra under the baton of David Fallis is matchless in this repertoire.

The opera has a large number of solo airs and if the singers were allowed to simply sing their numbers there will indeed be no Action on the Stage. Leave it to Choreographer Zingg to devise dances for the Atelier Ballet to accompany the singing. The production becomes a ballet as well as a pastoral opera.

The single backdrop that serves as a set for the entire production looks more like a decaying gothic castle on “a dark and stormy night” rather than anything that remotely resembles any notion one might have of Arcadia. When the choir sings of the pleasures of the plains, there are none to be seen. The center looks like the opening to a cave with overhanging rocks. The sky is dark and menacing and there is no hint of groves. Even the animals that are come bouncing across the stage seem to be running away from an approaching storm rather than happily romping through the dales of Arcady.

Aside from those two complaints, this is a superb production in period style that is worth seeing more than once. By happenstance, I saw it twice and enjoyed it even more the second time.
_____

Acis and Galatea by George Frideric Handel, presented by Opera Atelier, opened on October 30 and will be performed seven times until November 7, 2010 at the Elgin Theatre, 189 Yonge Street, Toronto. www.operaatelier.com
Posted by James Karas at 2:44 PM