DEATH OF A SALESMAN – OUTSTANDING PRODUCTION OF A MASTERPIECE FROM SOULPEPPER 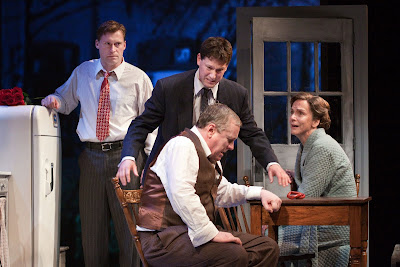 Arthur Miller’s Death of a Salesman premiered 61 years ago which makes the play a couple of years younger than Willy Loman, the salesman of the title. It is one of the masterpieces of the American theatre and Soulpepper’s production at the Young Centre, Toronto, is an extraordinary staging that does justice to the play.

Director Albert Schultz elicits stellar performances from an outstanding cast and the result is, to coin a phrase, a must see production for anyone who cares about the theatre.

Willy Loman is an ordinary man in the extreme. He drives all over New England carrying samples for a New York store and selling whatever he can. He has a wife and two sons and lives in a small house that was once surrounded by greenery but is now hemmed in by high-rise buildings. He has a mortgage and bills to pay and all the ills of a middle class American. But Willy has dreams, ambitions and desires on a grand scale. He does not see himself as an ordinary salesman but as a salesman who is well-liked; he does not have to wait to see the buyer; the cops do not give him tickets; he beats sales records; he is a somebody.

It is this simplicity and complexity, this pathos, exuberance, pathetic ambition and lack of ability in Loman that Joseph Ziegler captures in his defining performance.

Loman conveys some of these qualities to his two sons and they grow up with the faith that they are better than everyone and that they will succeed on character and desire instead of ability and effort. Biff (Ari Cohen) and Happy (Tim Campbell) grow up not just as shallow human beings but as liars and, in the case of Biff, as a thief and a criminal. Campbell plays Happy as the classic narcissistic womanizer who denies his own father to gain favour with a woman. Biff uses the discovery of his father’s infidelity as a crutch to cover his own nothingness.

The Lomans are surrounded by success. Willy’s brother Ben (William Webster) went into the jungle and came out wealthy. What is his secret, asks Willy. His neighbour Charley (Michael Hanrahan) owns a business and his son Bernard (Gregory Prest) becomes a lawyer who is about to argue a case before the Supreme Court and will stay with friends who have their own tennis court. Everybody around him is living Willy’s dream and he cannot pay his bills. He is reduced to begging foe a job from his employer Howard (Brendan Wall), another successful man, who summarily fires him.

Nancy Palk, speaking in her lower register, gives an outstanding performance as Willy’s wife Linda. Linda understands everything, says little and supports her husband to the end.

Set Designer Lorenzo Savoini opts for a small, claustrophobic set. The kitchen and sons’ bedroom in the Loman house are small and there is a panel on one side of the stage to indicate the changes in scenery. The panel shows greenery when Willy remembers the past but displays a forbidding tenement building in the present. The scene in Howard’s office and the restaurant are indicated with a view from a skyscraper and neon lights respectively. Very effective.

Near the end of the play, the travelling salesman imagines his own funeral. He sees people with cars with strange license plates from all over New England coming to pay their last respect to the well-liked Willy Loman. By that time Willy’s dreams and ambitions have all crumbled and the only think left for him is inglorious death and hopefully a funeral becoming someone of his ambitions if not his success. In the end, almost no one attends even his funeral

The final scene of the play is a Requiem for Willy on his grave site. Only his family and neighbours Charley and Bernard are there Biff has reached a cathartic realization that he is a nobody. The play ends with everyone leaving the cemetery. Schultz however wants us to know that Willy has an heir for his vacuous dreams and ambitions: his son Happy stays on the grave site after everyone leaves.

But if Willy was a failure right up to his funeral, he manages to achieve some posthumous success. By committing suicide, he leaves a substantial amount of insurance money for his wife – from a life insurance policy by money he “borrowed” from Charley.