DON PASQUALE WITH ANNA NETREBKO LIVE FROM THE MET 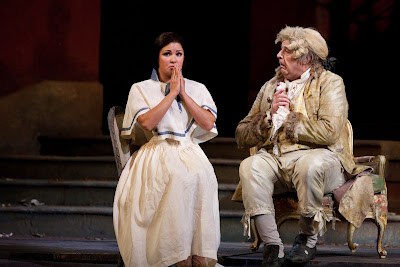 A rich old bachelor wants to marry a beautiful young woman. She is in love with a handsome young man and the two must outwit the old fool. There is a clever go-between who will devise a plot to get rid of the old codger and unite the young lovers.

Sounds familiar and in fact could be Rossini’s The Barber of Seville. Close enough but in this case we are talking about Gaetano Donizetti’s comic masterpiece Don Pasquale. The opera premiered in Paris in 1843 and was one of the last bel canto operas to be composed. It is also one of the best.

The Metropolitan Opera has an all-star cast for its production at Lincoln Center and, for us less lucky mortals, in movie theaters around the world Live in HD. The production is lively, brisk, funny, well sung and provides several hours of supreme entertainment. One does miss the ambiance of Lincoln Center and New York but you can’t have everything.

Don Pasquale wants to punish his nephew Ernesto for not marrying the woman he has chosen for him. He decides to marry the beautiful widow Norina. But she is in love with Ernesto and we have Dr. Malatesta, the plot mover, who will disguise Norina as a virtuous convent-trained girl and marry her off to Don Pasquale. She will turn into a bitchy spending machine and drive Don Pasquale crazy. He will get rid of her and she will marry Ernesto and we or maybe just they will live happily ever after.

The opera is a storehouse of marvelous melodies, gorgeous arias, duets and trios and some of the fastest patter songs you ever heard. One of them (the duet with Don Pasquale and Malatesta near the end of Act III) is such a perfect example of machine-gun speed parlando delivery, that the singers stop and provide an encore on the spot. Not an everyday occurrence but it was certainly a crowd pleaser.

The star of the show is clearly soprano Anna Netrebko as the widow Norina. There are no qualms about heaping praise on Netrebko's lustrous voice but there was a question mark about her doing this role. Opera buffa is not her natural territory but she showed that she has considerable comic flair and she handled the role with gusto. Her Barbie-doll pretty face is not capable of great expressiveness but she is still a pleasure to watch and a sheer delight to hear.

Bass John Del Carlo sang the name role. He is a Falstaffian comic actor and singer who seems to have been born for the role. He has an expressive face and a voice that is suited to the foolish old man who convinces himself that he can marry a feisty widow.

Tenor Matthew Polenzani is the perfect Ernesto, the young lover who would rather be disinherited by his uncle than marry a woman he does not love. He is earnest, passionate and sings with a lover’s conviction.

The conniving Dr. Malatesta is sung by baritone Mariusz Kwiecien. He is vocally excellent but appears a bit young for the role. I think of him as a Figaro figure but he lacks the barber’s wiles and humour. For some reason he wore sunglasses and I can only assume it was because the lights bothered his eyes and not because the director or designer decided the character needs them.

The main setting for Don Pasquale is a room in his house. Designer Rolf Langenfass’s set gives the impression that Don Pasquale’s house is full of dilapidated furniture occupied by a slob. He should hire a cleaning lady, you say, but he has all those servants. What are they doing? Why the mess? Whatever the answer, the messy set adds nothing to the production.

Director Otto Schenk sticks to a traditional production that lets you enjoy the myriad of melodies and comic business from one of the best examples of the genre.

Gary Halvorson’s handling of the camera angles and close ups was sensible and you could enjoy an outstanding production and start saving for a trip to New York to see the real thing.

The production will be shown in movie theatres again on December 4, 2010 and on January 17, 2011. Go to www.Metopera.org/HDLive or www.cineplex.com/events for more information.
Posted by James Karas at 3:02 PM