The Shaw Festival in its 60th season has two plays out of ten by the playwright whose name it bears, a 20% share of its productions. Bernard Shaw’s The Doctor’s Dilemma is now on along with Too True To Be Good.

What is the dilemma? Dr. Colenso Ridgeon has discovered a cure for tuberculosis and has ben awarded the Nobel Prize. He is the only one who can administer the cure and he can only take 10 patients. He has room for only one more and must make a choice between the honorable, decent and altruistic Dr. Blenkinsop (Jason Cadieux) and the ethically compromised wastrel but talented artist Louis Dubedat (Jonathan Sousa).

That may be the dilemma but Shaw uses much of the play to satirize, ridicule and show his sheer contempt for the medical profession. There are four doctors in addition to Dr. Ridgeon in the play and Shaw’s treatment of them as laughable quacks is merciless. 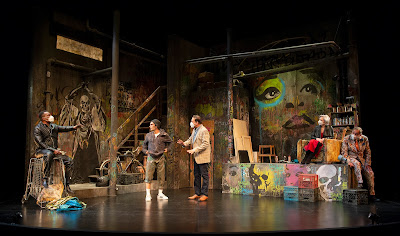 But that is only part of the dilemma. The artist is married to Jennifer (Alexis Gordon) , a gorgeous woman, with sexual magnetism. She the driving force of the play. Three of the  doctors fall in love with her to put it politely or, more bluntly, much of their thinking is done by their hyperactive hormones instead of their brains. This does not apply to the decent Dr, Blenkinsop or to Dr. Patricia Cullen (Sharry Flett) who is Dr. Patrick in the original play.

Director Diana Donnelly gives the play a daring production that has many refreshing virtues and some flaws. She brings the production from Edwardian England to today and provides the means of making some of the more prosaic speeches bearable and at times amusing. Watching the hirsute, pompous and even idiotic doctors in black three-piece suits in some period productions pontificating about their medical knowledge and skills can be snooze-inspiring. Donnelly respects the script but when one of the doctors begins a speech, he steps up towards the audience, a spotlight is zeroed in on him but other activity around him continues as he jabbers on. A good idea.

The doctors can be pompous asses but laden with Shaw’s verbosity they may not be amusing. Donnelly takes care of that by making some of them them ridiculous in their clownish costumes. Dr. Bonington (David Adams) even puts on a clown’s nose and mustache) and their claims to medical knowledge become a joke every time they mention it.

The second act of the play takes place in a club after a dinner congratulating Dr. Ridgeon, the genius doctor, for winning the Nobel Prize. The scene change is awkward as the characters change costumes in front of the audience Everyone is dressed in formal white with Dr. Walpole wearing a white skirt. Jennifer Dubedat appears wearing a stunning white gown that causes severe hormonal hyperactivity among most of the quacks. Dr. Ridgeon is in love with her and his judgment is at least clouded when it comes to whose life he is not going to save.

In the meantime, Louis Dubedat steals someone’s gold cigarette case, borrows money under false pretenses and reveals that he is scum. And Minnie (Katherine Gauthier), his real wife appears which means that he is also a bigamist.

The next act takes place in Dubedat’s studio/residence where the pace of the play falters and there is one sequence when several doctors walk in and out of the bedroom (I guess) and it appears that they had sex with Jennifer. I found the scene confusing because there is no suggestion in the play that this happens while her husband is dying. I may have misconstrued the whole thing. 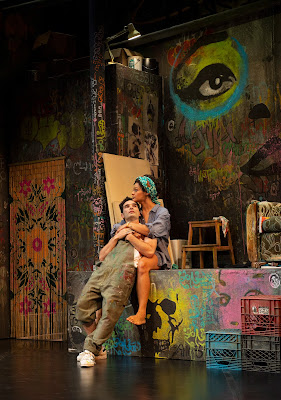 Alexis Gordon is splendid as Jennifer. She is smart, manipulative, forceful and a woman to be reckoned with. She handles the men marvelously.

Talwar turns in a fine performance as Ridgeon. He is more straightforward than some of his colleagues and he does not pontificate as much as the others. Sharry Flett is excellent as the Dr. Cullen, attractive and sensible.

Louis’ and Adams’ characters are caricatures and amusing for it. Cadieux’s Blenkinsop is an altruistic doctor caring for the people who otherwise may not receive any medical care.

Sousa is excellent as Dubedat, shamelessly amoral and sees no need to repent for his dishonesty. He is only interested in art.

Donnelly succeeds to a great extent with her approach to the play but she loses it somewhere along the line. We do gain in comprehension the dialogue and not having the actors attempt English accents (with frequently appalling results)  is a great benefit.

The Doctor’s Dilemma by Bernard Shaw continues in repertory until October 8, 2022, at the Festival Theatre as part of the Shaw Festival, Niagara-on-the-Lake, Ontario. www.shawfest.com.

James Karas is the Senior Edtor - Culture of The Greek Press.