GEM OF THE OCEAN – REVIEW OF 2022 SHAW FESTIVAL PRODUCTION

August Wilson (1945-2005) was one of  the most eminent portrayers of the lives of blacks in the United States. His ten-play sequence called The Pittsburg Cycle or the American Century represents every decade of the 20th century. Gem of the Ocean, his penultimate play, opened in 2005 and covers the first decade of the twentieth century.

The play is set in Pittsburgh’s Hill District where Wilson was born and it deals, inevitably, with slavery forty years after Abraham Lincoln put an end to it. No one should doubt that slavery is the greatest crime against humanity ever perpetrated. It started in primordial times and despite some significant progress in the 19th century, it is still very much with us.

Wilson does not deal only with the condition of slavery but more importantly with the seizure of people and their  forced transportation across the ocean to the slave markets of North America. Those people lost their freedom, their society, their identity and even their soul was ripped out of them. They were left with nothing. One character in the play has a copy of the bill of sale by which she was sold for six hundred dollars like a chattel.

Gem of the Ocean takes place in 1904, forty years after American slaves were liberated. Many of the characters of the play are former slaves. Aunt Ester, the central character claims to be 285 years old. That is not a joke because that number looks back to 1619 and the arrival of the first slave ships in Hampton, Virginia.

Aunt Ester is indeed old and Monica Parks does a fine job as the crotchety mistress of the house and as a “soul cleanser.” My small comment about Parks’ performance is that she had too much energy to be very old. 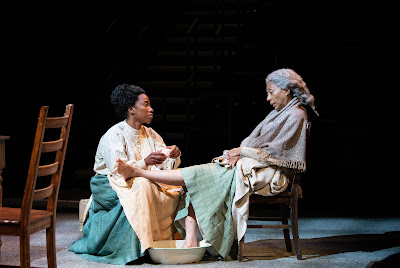 Aunt Ester has an interesting circle of people living with her and visitors around whom the plot of the play is constructed. The plot catalyst is the theft of a bag of nails from a mill and the subsequent death of a person thought to have committed the crime. He did not, but preferred to drown rather than face the consequences of being convicted regardless of guilt.

The discovery of the guilty person and the consequences are the external events that drive the play. But Aunt Ester has a visitor from Alabama, Citizen Barlow, who wants his soul  to be cleansed of its sins so he can find redemption. Nathaniel Judah as Barlow is a troubled man and Ester performs a complex ritual which includes seeing a huge, imaginary grave where the bones of slaves are buried. It is like seeing the countless people who died in slavery and paying homage to the suffering of humanity. Wilson forces Barlow and us to imagine the bones of the dead millions in an area half a mile by half a mile. A stunning image.

"Black" Mary is Ester’s set-upon housekeeper, an attractive and intelligent woman who is also learning about soul cleansing. She is the sister of the aptly named Caesar, a well-off businessman and a law-and-order-cop who is a shameless capitalist and has no qualms about shooting people. Allan Louis as Caesar reminds us of every bad cop that we see on the news and he is effective in the role. In one of the highlights of the play, she renounces and denounces her brother. Sophia Walker does an excellent job as “Black” Mary. 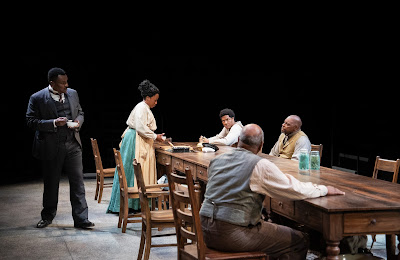 (l to r): Allan Louis as Caesar Wilks, Sophia Walker as Black Mary,
Nathanael Judah as Citizen Barlow, Jeremiah Sparks as Eli and
David Alan Anderson as Solly Two Kings (seated, foreground).Photo by Emily Cooper.
Solly Two Kings, a friend of Ester, is a former slave who now collects dog feces used for tanning leather. He worked on the Underground Railroad helping slaves escape to Canada. He worked on the Underground Railroad with his friend Eli who is now taking care of Ester. They describe Canada as the promised land  for the escaped slaves where they were welcomed and treated with uncommon decency. David Alan Anderson plays Solly and Jeremiah Sparks plays Eli and they give us the essence of decent human beings living in an indecent world but maintaining their humanity.

Jason Cadieux plays Rutherford Selig, a friend of Ester’s and a pathetic peddler who sells pots and pans.

The set by Camellia Koo consists of a long table with ten chairs. There is no need for much more except for the cleansing ritual where lighting designed by Kevin Lamotte provides the background .

Kudos to Director Philip Akin for presenting a well-balanced, beautifully orchestrated production with a marvelous cast.

This is a multi-layered play that gives us the spiritual and “real” inheritance of people who lived through slavery and carry the accumulated memories of centuries. Barlow needs to expiate his sins and the anger of the people of over the drowning of an innocent man that  leads to the burning of the mill, the town’s main employer. “Civilization” needs to explain and expiate its commission of the greatest crime in history.

Gem of the Ocean  by August Wilson continues until October 9, 2022, at the Jackie Maxwell Studio Theatre, Niagara-on-the-Lake, Ontario. www.shawfest.com.