Ten years ago, we saw Ins Choi’s Kim’s Convenience, a warm, funny and touching paean to immigrants, especially Koreans who open convenience stores and work ungodly hours to survive. The play became a successful TV series and Choi has never had to look back.

His latest play is Bad Parent in which he examines the life of a young married couple that has an eighteen-month-old child. The play requires two actors who handle four parts. Charles and Norah go through the disagreements, arguments and fights of a young couple that must cope with a child, parents and jobs that most people would recognize from direct experience or general knowledge.

The play has a number of monologues and the highly capable actors Josette Jorge and Raugi Yu address the audience directly about past and present events that give cause for friction. Jorge as Norah describes him as being a man who never had to do anything because everything was done for him by his adoring mother. Yu as Charles is spoiled rotten and his mother does not like Norah. Of course not, no one is good enough for her son. All of it can be and I suggest should be done through dialogue but Choi has decided to have the actors step up to microphones and address us. 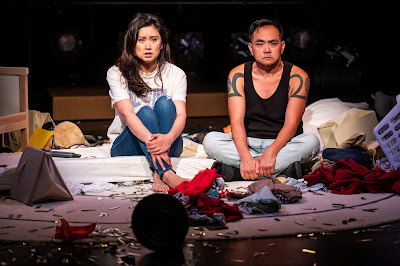 Communication or lack of communication between the two is a major source of disagreement. They do things without informing the other, let alone discussing it. She hires a Filipino nanny named Nora, he arranges to go into a food truck business with the nanny. Talking to each other may be a solution but they may not be able to do that unless they have microphones in their home.

The child, named Mountain, cries, eats, defecates and urinates. The house is a mess with diapers being a major decorating feature. Mountain sleeps with his parents and Charles buys a bed from IKEA to let the tyke sleep on it. He does not mention it to Norah.

Norah goes back to work and is attracted to her coworker Dale. The relationship remains platonic but it does emphasize Charles’s deficiencies. He is attracted to Norah and the friction between her and her husband rises to a peak when she tells him that she wants a divorce and lists a hefty number of grounds.

The fights rarely become toxic beyond repair and, as I said, many of them would be familiar to most married couples. The switches from Nora to Norah by Jorge and from Charles to Dale by Yu are done smoothly and adeptly and they are a relief for us. There is comedy and touching humanity as the couple works out or fails to work out some of the issues facing them as well as almost all newlyweds and young parents. There is no “bad parent” although each of them considers the other as an inferior spouse and parent.

Sophie Tang’s set consists of an IKEA bed and shelving unit full of household items that serve well when Nora becomes furious and starts tossing things around. Charles is a composer of songs and we hear a couple of his compositions and are treated to blinding light in the process.

Meg Roes directs this funny, touching and enjoyable examination of the rites of passage of love, marriage, parenting and getting used to all those strange territories of life.