JUST TO GET MARRIED – REVIEW OF 2022 SHAW FESTIVAL PRODUCTION

Cicely Hamilton’s Just To Get Married has the dual purpose of being a play’s title and a summary of its plot. It describes the status of women in Edwardian England with frightful accuracy. A woman faced a life of poverty as a spinster, or she found a man just to get married and find support.

Hamilton (1872–1952) was a feminist, a suffragette, an actor and a prolific writer. She wrote 36 books in a long career, but she has been almost completely ignored for more than a century. The Shaw Festival to its great credit produced her  Diana of Dobson’s in 2003 and this year stages Just To Get Married, a wonderful comedy in a terrific and thoroughly enjoyable production.

Georgina Vicary is 29 years old and living with relatives who would like her to find a husband and move on. She has no money and knows that she has to find a man just to get married. Her aunt and uncle bring Adam Lankester (Kristopher Bowman), a somewhat awkward but otherwise eligible young man, to their country estate and are hoping that he will propose.

He does and Georgina pretends that she loves him and the wedding is planned. Georgina knows her situation but decides to call off the wedding the day before the ceremony. It is a shocking step and she is thoroughly ashamed of her act. Lankester is understandably  insulted and angry. The ashamed Georgina leaves her uncle’s house and goes to the train station to go to London.

That is the basic outline of the play without revealing how it ends. 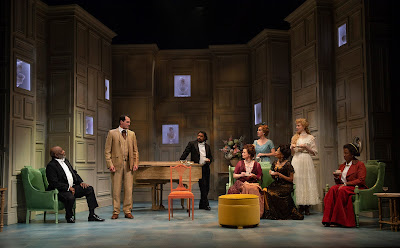 The production directed by Severn Thompson is a rousing success. Kristi Frank is funny, moving, convincing and an excellent Georgina. Bowman as Adam is an upstanding young man, decent, generous and passionately in love with Georgina. He tries to understand her action and his innate humanity never leaves him. The two act and react beautifully with each other in performances that are a delight to watch.

The supporting cast and Thompson’s directing are equally praiseworthy. David Alan Anderson as Sir Theodore Grayle, Georgina’s uncle, is hilarious as he tries to avoid any confrontation. Lady Catherine Grayle, (Claire Jullien), the aunt, wants to get her niece married and she tries to maneuver the would-be couple to get on with it. The rest of the cast deserves nothing but praise.

The set by Michael Gianfranceso consists of the drawing room at first and then the library of the Grayle mansion. They are bright and pleasant but furnished on a budget and the library is nice but short of books. The third act takes place at the railway station, and it is adequate. Ming Wong’s costumes are beautiful as becomes a good designer and ladies and gentlemen of a certain class in a certain period.

There are other plays by Hamilton that deserve to be produced and we can only hope the Artistic Director Tim Carroll will select one or more of them.

Just To Get Married was the final production of the season for me and it was the most pleasant way to return to the Shaw Festival and Niagara-on-the-Lake. A Christmas Carol and White Christmas await us in November and December.

Just To Ge Married by Cicely Hamilton continues until October 16, 2022, at The Royal George Theatre as part of the Shaw Festival, Niagara-on-the-Lake, Ontario. www.shawfest.com/