THE LORAX – REVIEW OF MUSICAL BASED ON DR. SEUSS STORY

The Lorax, Dr. Seuss’s engaging story about the environment, has been turned into an even more engaging, entertaining, boisterous and simply marvelous musical. It was first produced in London two years ago and is now making its North American premiere at the Royal Alexandra Theatre. It is a Christmas gift for everyone.

The Lorax, as most children may know, is a short fable about a small creature with a huge yellow mustache that speaks for the trees. A long time ago, we are told, the grass was green, the clouds were clear and Truffula Trees with their brightly coloured tufts stretched for miles and miles. 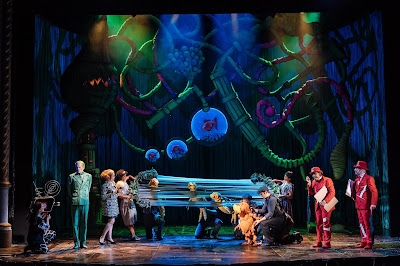 Photo by Manuel Harlan
Then came the greedy Once-ler who cut down the trees to make Thneed, a multi-use product that everyone wanted. Once-ler cut down all the Truffula Trees, despoiled nature and all the living things in what used to be a paradise.

David Greig adapted the story and Charlie Fink composed some wonderful songs to create a delightful piece for the theatre.

The Lorax is represented by a small puppet with a big mustache and it is handled by three puppeteers. David-Ricardo Pearce is the voice of The Lorax in addition to being a puppeteer and he is joined by Laura Caldow and Ben Thompson who do superb work.

Simon Paisley Pearce plays Once-ler who is not so much evil as a practical businessman who sees an opportunity to make money and takes advantage of it. All we need to do is look around us and we can point to any number of industries that are destroying the environment in the name of good business. (The hardwood floor manufacturers were so upset by Dr. Seuss’s story, they had their own story written as an antidote.)

Greig has expanded the short original story by adding a number of characters and Fink has helped with his songs to provide about two hours of entertainment.

The major character after Lorax and Once-ler is Small Ed played with verve and energy by Michael Ajao. There was a delay in raising the curtain for the second act and Ajao came out and seemed to improvise rhyming couplets to keep the audience entertained. His performance is just as inventive and entertaining. 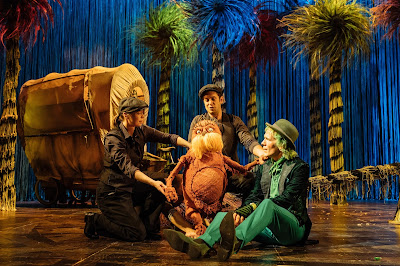 Laura Caldow, David Ricardo-Pearce, Ben Thompson and Simon Paisley Day.
Photo by Manuel Harlan
Once-ler has a large family and there are inspectors, storytellers and musicians to sing and provide humour. The production directed by Max Webber, designed by Bob Howell and choreographed by Drew McOnie is colourful, fast-paced, inventive and brilliantly told.

I was accompanied by Emma, my Associate Reviewer. She is fourteen going on twenty and expressed her views very succinctly. She gave praise for the smooth transition from one scene to the next, admired the costumes and props and gave high marks to Wendy Mae Brown who sang vibrantly when she appeared in a barrister’s gown and wig. She praised David Ricardo-Pearce’s singing but was less enthusiastic about Day’s vocal ability.

After delivering the above critique in a single breath, I asked her what courses she was taking in Grade nine. Drama, she answered and added that another reason she liked The Lorax was because it was suitable for young and old. Speaking of young and old, I asked her if her mother was acting maturely by never saying “no” to her. Yes she does.

There you go. You have the word of two mature reviewers and I would rely on my Assistant and go see The Lorax.
_____


The Lorax, adapted by David Greig with music and lyrics by Charlie Fink from the story by Dr. Seuss will run until January 21, 2018 at the Royal Alexandra Theatre, 260 King St. W. Toronto, Ont. www.mirvish.com
Posted by James Karas at 4:02 PM