Ross Petty calls his production of A Christmas Carol “the FAMILY MUSICAL with a SCROOGE LOOSE! Well, that tells only a small part of the story of his treatment or mistreatment of Charles Dickens’ classic tale of nastiness and redemption.

After a boisterous rendition of “It’s the most wonderful time of the year” and “Deck the Halls” a man in a white night cap and robe appears and he is roundly and delightfully booed by the audience. Now you know where you are. A theatre audience dominated by pre-teenagers who are highly opinionated and ready to express their views.

The rambunctious show’s relationship to Dickens is described when we are in a cemetery and are shown his tombstone. He must be rolling in his grave, we are told. He may well be but no doubt he would enjoy this parody of his story.

We have the pretty Jane (AJ Bridel) and the handsome Jack (Kyle Golemba) who will eventually reform Scrooge and kiss. A very loud “wooo” please. This Jane is a modern lady who believes in equal rights and equal pay for women and she goes on strike. Jack harbours a secret about his employer whose name is scrambled and we learn of his true identity near the end.

Scrooge’s transformation is indicated most loudly by his offer of equal pay for his all employees. And, oh yes, mobile phones called Bumblerries play an important part in this version of the story. We support Canadian companies.

But we need a lot of broad humour. Bring in Plumbum, gaudy makeup, gaudier costume, played and overplayed to hilarious effect and popular approval by Dan Chameroy. Plumbum also plays the three Ghosts.

We need more colourful characters. Please provide us with three Ghostdusters, three Humbugs, some Zombies, a Jacob Marley from Jamaica and a crowd. Boisterous singing, video projections and lots of extraordinary colour throughout. A few commercials from BMO and Hilton Hotel using cast members are de rigueur. 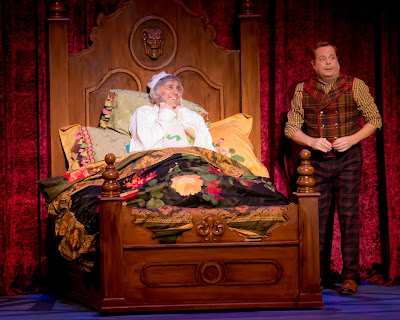 The story is written (adapted?) by Matt Murray and Jeremy Diamond with numerous references to current events for the adults. Someone says a few things and the comment is “that speech will be used by Melania Trump tomorrow.” If you are late for something, just tell them how easy it is to get off the Gardiner onto the Spadina ramp. Anne Coulter is not dead even if there is a tombstone for her. She is just hanging around.

Tracey Flye directs and choreographs the show and Levon Ichkhanian is the music coordinator. The outlandish and colourful costumes are designed by Dana Osborne and the sets are by Cory Sincennes.

In order to get a balanced view of the show, I brought three Associate Reviewers with me and, as usual, their views are far more cogent and relevant than mine.

Veteran Associate Emily (I’m going to be 10 in March) zeroed in on the essential point of the musical: It is about the true meaning of Christmas. We have to be nice to people. Neophyte Associate Ava, who at 8 is one minute older than her sister Hannah, added that people should not be so greedy and money is not that important. Hannah joined in the condemnation of greed and advocated decency.

They all gave the show highly favourable reviews and were struck by different moments. Ava found the scene where Plumbum (the lady with the gobs of lipstick) checks the sheets on Scrooge’s bed and wonders if he needs a diaper change, just hilarious. Hannah enjoyed Plumbum saying she went to the Danforth for a souvlaki. Guess where Hannah goes for lunch. Emily really liked Plumbum saying she watched Grease for 45 minutes while waiting.

There it is. Well-sung, well-danced, well-acted and enthusiastically received by three perceptive and infallible Associate Reviewers.
___