Erin Shields’ play Instant, now playing in The Studio of Young People’s Theatre, is billed as a timely play for teens. That is true and laudable. The play is well done, entertaining and connects with the spectrum of teens across the GTA.

The structure of the play and the production are simple and spartan. Meredith, Rosie and Jay are three teenagers who go to the same school. Meredith (Michelle Rambharose), like most youngsters, complains about being forced to take piano lessons. One day, however, she hears a fugue being played and she connects to the tune. She decides that she wants to use the tune as the basis for a song that she wants to compose. 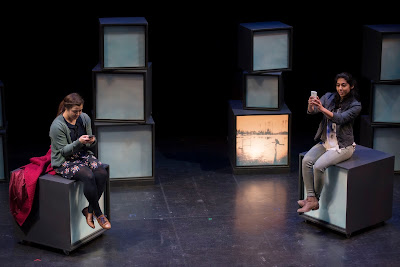 Meredith and Jay are not white but that is just a minor difference in skin colour. That is important and stated only subliminally.

Their friend Rosie’s (Leah Fong) father has MS and she needs to raise a great deal of money for his medical needs. She goes on social media and is enormously successful in attracting a large following.

The three are savvy and connected to social media, they have disagreements but Shields focuses on their dreams and ambitions and wants to entertain us, no doubt, but also convey lessons to the teens in the audience.

These are not the white kids of most movies and TV shows with all the angst and their middle class fights. They are not like everyone else; they are every teenager and that is one of the points of the play.

The three actors are all in their twenties but they make credible teenagers and give fine performances. Fong’s Rosie starts as a shy and awkward kid but she grows and matures, as they all do. Rambharose as Meredith is lively, enthusiastic and the type of teenager who gives early notice about her intention to succeed. 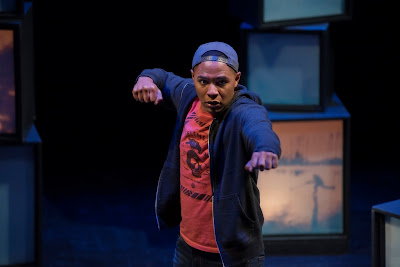 Dakota Wellman in Instant. Photo: Andree Lanthier
Wellman’s Jake is just as dedicated to becoming a major league hockey player but he (Erin Shields) adds a necessary caution about violence in hockey. He is against it. The shy Rosie outstrips them both in her success on social media.

The play is done virtually on an empty stage with judicious use of some boxes and lighting. It lasts for about 45 minutes and time flies. You can do a lot with very little.

The day I saw the play The Studio was full with grade nine and ten students taking theatre at Middlefield Collegiate Institute in Markham, Ontario. It looked like every ethnic group from Southeast Asia was represented with only a few whites.

The choice of play, the quality of the production by Geordie Productions of Montreal and the superb directing by Dean Patrick Fleming were all first rate. Equally praiseworthy is YPT’s bringing in teenagers representing so many ethnic groups to see a play. If we want Stratford, Shaw and theatre in general to thrive, now is the time to groom the audience of the future.
___________
Instant by Erin Shields opened on November 28 and will continues until December 15, 2017 at various times at The Studio, Young People’s Theatre, 165 Front St. East, Toronto, Ontario. www.youngpeoplestheatre.ca
Posted by James Karas at 6:23 PM