What do you get when you put seven illusionists on stage?

One hell of a good show.

It was so much fun, I can start with complaints. To call them illusionists may be literally accurate but it does a disservice to the show. They are damn good magicians. Illusionists gives the impression of a temporary departure from strict logic when we almost believe the unbelievable. A magician has superhuman powers and he does marvellous feats that are far more than an illusion – they are magical. And why tell us they are Live from Broadway in the title. They are magicians from around the world and I believe everything that they do is magic.

Their nicknames are simply delightful. These people are not mere creators of illusions, they are specialists. You get The Deductionist – Scotland (Colin Cloud) which I take to indicate national origin as well as superior mental agility and ability that could outwit the CIA, the FBI and the KGB (or whatever they are called now) without waterboarding.

The Unusualist (Raymond Crowe) can do many things but he can also provide a few minutes of delightful hand shadow theatre with What a Wonderful World as background.

The Eccentric (Charlie Frye) is a juggler par excellence with comic flair. Rings, balls, a stick, his hat, his vest, he handles all of them with panache, speed and comic skill. He bills himself as Charlie Frye & Company in recognition of his wife Sherry who is on stage with him and participates in the comedy.

The Daredevil (Jonathan Goodwin) can put everyone in the Princess of Wales Theatre on the edge of their seats as he shoots arrows from a powerful crossbow while blindfolded. His target: a balloon on the head of an assistant. And he emulates Houdini in getting out of a straitjacket while hanging upside down with his clothes on fire. He must get out of the straitjacket and douse the flames before he is roasted. He can support his body on a single nail and have a cement block split in two on his stomach. Holy Jesus, Mary and Joseph. 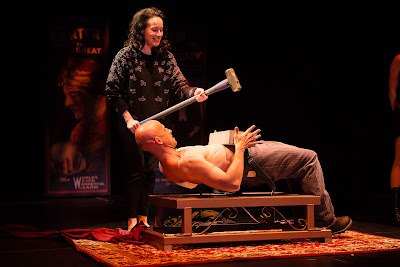 Jonathan Goodwin, The Daredevil. Photo by Claudia James
The Trickster (Jeff Hobson) is to some extent the host of the evening. He is a natural comedian who can interact with the audience and evoke laughter at will. He chose an interesting audience member on opening night – a man called Mark Saunders who happens to be Toronto’s chief of police. Hobson demonstrated his ability with cards and nicked the chief’s watch. He returned the watch later but he proved his astonishing ability as a non-illusionist pickpocket.  Hobson is akin to Liberace is his outrageousness and reassures audience members that he touches that he is not a senator and there will be no Kevin Spacey stuff. An amazing performer. 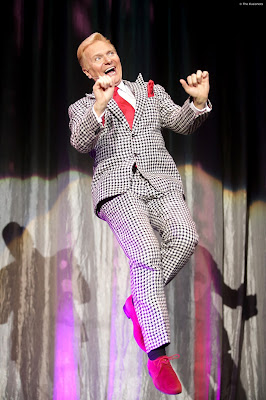 Jeff Hobson, The Trickster - Photo by Joan Marcus
The Manipulator (An Ha Lim) can, well, manipulate cards in huge numbers with speed, dexterity, appearance and disappearance that defies belief. Where do the cards come from, where do they go, how can anything be done that quickly? After thinking about it, I have come to the inescapable conclusion that it is simply magic.
The Grand Illusionist (Darcy Oake) is a Canadian who dispels the notion that only foreigners can do incredible non-illusory magic. He can produce white doves to fill a barn. He lights a match and a dove appears. He takes out a handkerchief and out pops a dove. And he does a disappearing act that is simply astounding. 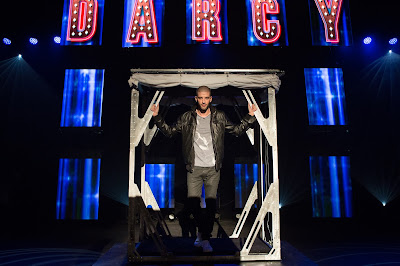 Darcy Oakes, The Grand Illusionist - Photo by Danielle Baguley
In addition to the individual acts, the show has glitz, music, lighting and rapport with the audience that makes for an integrated theatrical evening. There is extensive use of large screens for the audience to be able to see all of the details of each performance and roving cameras to capture the interaction with the audience. A number of people from the audience are brought on stage to add credibility to the illusions created by the magicians and to add humour.

If I have given the illusion that I enjoyed The Illusionists, it is because the magicians forced me to do it by entering my mind and showing me how they can make me disappear unless I told the truth about their show.
__________