Do you want to see a Bollywood musical, live on stage, in Hindi and done by an Indian theatre company?

Go and see Piya Behrupiya which is playing now at the Young Centre for the Performing Arts in a production by The Company Theatre of India.

If you check the title of the play in the brackets under Piya Behrupiya, it says Twelfth Night by William Shakespeare translated by Amitosh Nagpal. If you are looking for Shakespeare’s play Bollywoodized you are still in luck. Otherwise stay home and watch CNN. 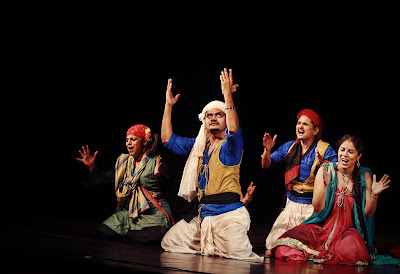 Ensemble. Photo by The Company Theatre
This version of Twelfth Night was commissioned by Shakespeare’s Globe and has been brought to Toronto by Why Not Theatre in association with Soulpepper. The names of the characters of Shakespeare’s play have been kept and there are a number of recognizable plot incidents. Aside from that, you are seeing a Bollywood musical.

That means you will get a very energetic production with lots of singing, dancing and comic routines. As for understanding the actors, unless you are versed in Hindi, you will have to read to the projected translation on each side of the stage. Almost none of Shakespeare’s language is preserved in the translation. In fact what you will read sounds like Shakespeare translated into Hindi and then translated back into English. The projected translation is difficult to keep up with because much of the text is spoken at a brisk pace. By the time you turn your head to read the translation, the joke is gone. 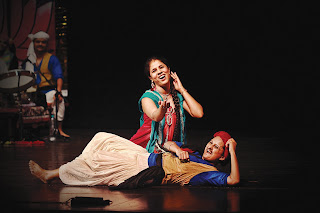 Mansi Multani, Geetanjali Kulkarni. Photo by The Company Theatre
The actors interact with each other sporadically. They prefer to speak directly to the audience and they are quite funny when you can put what they say and the translation together.
I do not wish to take anything away from the spirited performance of this Bollywood play. The nine actors under the direction of Atul Kumar show genuine talent in acting in this type of production. Take Mantra who plays the minor role Sebastian, Viola’s twin. He complains that Shakespeare was asleep when he wrote that character and he engages the audience in some very funny comic business.

Neha Saraf as the clown Feste is downright athletic in her dancing, singing and clowning. The melancholy Orsino of Shakespeare becomes a song-and-dance man in Bollywood. Trupti Khamkar as Maria, Aaadar Malik as Andrew Agucheek and Gagan Riar as Uncle Toby are appropriately clownish but they are not much different from Geetanjali Kulkarni as Viola/Cesario or Saurabh Nayyar as the dour Malvolio. In other words, they have all been Bollywoodized. The lovely Mansi Multani as Olivia may be related to Shakespeare’s character.

The music is provided by Arnod Bhatt on a harmonium and Niketa Saraf and Rahul Sharma on percussion. They are seated on the stage and the cast sits behind them when not involved in the scene directly and participates in the action.

In the end it is all a matter of taste. The Indian musical with its dancing, singing and clowning is staple entertainment for hundreds of millions. There is nothing unusual in parodying or travestying Shakespeare. But the approach of The Company Theatre of India did very little for me.
______