Familiarity in opera breeds enthusiasm, strong opinions and a full house. That is the expected reaction to the Canadian Opera Company’s production of Bellini’s Norma as the centerpiece of this fall’s two productions.

Producing Norma without a star soprano versed in the bel canto repertoire will not bring the end of the world but it may have deleterious effects on the opera company and its artistic director. Alexander Neef, the COC’s General Director, need not worry about his job and Torontonians can hold their head high about the quality of opera in their congested city. 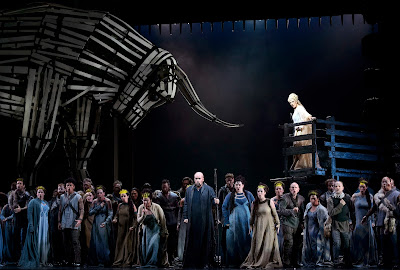 Soprano Sondra Radvanovsky has the vocal range, tonal beauty and acting ability to deliver an extraordinary Norma and she does not disappoint. There are many ways of playing Norma, the Druid priestess who betrays everything by falling in love with a Roman proconsul, the enemy of occupied Gaul. As if that were not bad enough, she has two children by him and he has tired of her and fallen in love with a young novice priestess named Adalgisa. Try counting the emotional turmoil that Norma must express – the betrayed lover, the illicit mother who thinks of murdering her children, the deceived friend and the treacherous priestess who has betrayed her people.

There is wide latitude for a soprano to deliver a melodramatic, almost histrionic Norma or a deadly one of the singer lacks the vocal and acting prowess that the role demands. Radvanovsky maintains a mostly regal composure that is both noble and emotionally searing. From finding out that her friend Adalgisa is in love with Pollione to confessing to her followers that she has betrayed them and stepping into the pyre, this Norma does it all with poise and emotional grandeur.

Tenor Russell Thomas is terrifically fine foil for this Norma. He has a splendid voice and his Pollione grows from the deceiving lover into a noble man who joins Norma in love and death in the ultimate moments of the opera.

Mezzo soprano Isabel Leonard’s Adalgisa is a decent woman who has betrayed her faith and her friend but she finds nobility as well. Vocally Leonard does superbly and she is a pleasure to hear especially in her duets with Norma where the two voices provide both contrast and similarity in tone.

Baritone Dimitry Ivashchenko is a commanding Oroveso, the High Priest and father of Norma, with impressive resonance and presence. 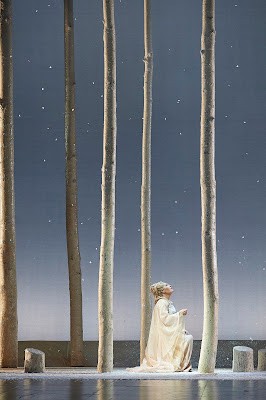 Sondra Radvanovsky as Norma. Photo: Michael Cooper
Director Kevin Newbury and Set Designer David Korins have a particular approach to the opera. The set consists of four massive pillars with heads of bulls on top of two of them. The forest of the Druids consists of bare trees and the mistletoe that Norma cuts is white. The dominant colour is almost entirely gray with flashes of red and blue at the back of the stage. The gates that close off the back of the stage when we are not in the forest make the place look like a large storage garage.

In the second act the head of a huge bull appears on the left side of the stage. It looks like a Trojan Horse or perhaps a Trojan Bull. It has only one horn that points menacingly downwards. I did not get the symbolism of the bull whose base in the end served as the pyre on which Norma and Pollione meet their fate. There was a cart with a raised platform as well and it served as a sort of pulpit for Norma and Oroveso. I am not sure that it was necessary or if it added anything to the production. Newbury seems to think that snowflakes are a good idea but, again, I am not convinced that they did anything.

The orchestra and chorus under the baton of Stephen Lord did a great deal with Bellini’s melodic and often lush music.

Radvanovsky gives a defining performance as Norma with superb singing from the rest of the cast. You may forget some of the sets but you will not soon forget Radvanovsky’s performance.
_________

Norma by Vincenzo Bellini with libretto by Felice Romani opened on October 6 and will be performed eight times until November 5, 2016 at the Four Seasons Centre for the Performing Arts, 145 Queen Street West, Toronto, Ontario. Tel:  416-363-6671. www.coc.ca
Posted by James Karas at 10:18 PM