When the overture begins and the stage lights go on, we see a large, ordinary table and chairs in an ordinary room.  A cleric is admitted into the room where people are sitting around the table. He begins to conduct what looks like a Bible class silently. He gesticulates a great deal and points towards heaven like a zealous televangelist. The people are dressed in modern clothes of no particular distinction but one man is wearing a kilt. 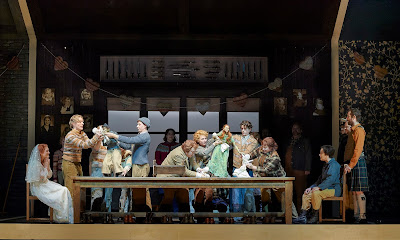 A scene from the Canadian Opera Company’s production of Ariodante, 2016, photo: Michael Cooper
The latter scene is not in Handel’s opera but is an invention of Jones who gives Ariodante a fascinating and highly original interpretation.

We will soon discover that the cleric is Polinesso, the Duke of Albany and the man in the kilt is the King of Scotland. In the opera Polinesso is the bad guy but in Jones’s production he is a creep. As a cleric he is a Tartuffian fraud and as a human being he has Trumpesque proclivities towards groping which progress into serious sexual assault and perhaps rape. Nice guy.

The plot begins to unfold. Ariodante is a prince in love with Ginevra the daughter of the King. Polinesso professes love for Ginevra (she tells him to go to Hades) while Dalinda, her servant, is madly in love with him. In order to achieve his objectives of (a) getting rid of Ariodante, (b) marrying Ginevra and (c) grabbing the throne of Scotland, Polinesso arranges for Dalinda to dress like Ginevra and have Ariodante see them in Ginevra’s bedroom in a compromising position and hello objectives. Almost.

Polinesso gives Ginevra a potion that knocks her out (Jones’ invention). Ariodante does see “Ginevra” being unfaithful and is so distraught he is ready to commit suicide (and is reported dead), the King disowns Ginevra, she is beside herself with grief …and if this sounds like something out of Shakespeare’s Much Ado About Nothing, yes, it is. But stay tuned for the happy resolution to all of these entanglements and be prepared for a surprise that, like the scene with Polinesso as an evangelist, is the invention of Jones. 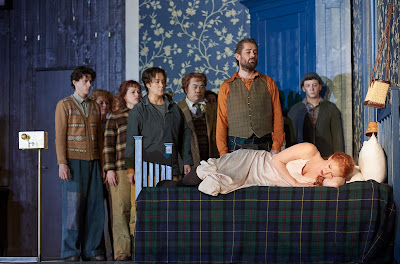 Jane Archibald as Ginevra (on bed) with Alice Coote as Ariodante and Johannes Weisser
as the King of Scotland (in front row). Photo: Michael Cooper
Handel provides an outpouring of recitatives, arias and duets that go through a gamut of emotions. From the expressions of blissful love and happiness of Ginevra and Ariodante, to scenes of grief, treachery, despair, disgusting behaviour, this opera has vocal and musical demands that demand extraordinary talents. The COC has them.

Red-haired soprano Jane Archibald leads the cast as Ginevra. She begins by making herself beautiful and declaring her love for Ariodante but changes her tune to rebuffing Polinesso if gruff terms. After some blissful moments with Ariodante she is crushed, disowned and goes mad. That is a great deal of vocal and emotional ground to cover and Archibald is simply splendid at it.

Mezzo-soprano Alice Coote sings Ariodante, a role initially assigned to a castrato. Ariodante wears baggy pants and of course is anything but a feudal knight. Coote makes us feel his happiness and his pain and we get over the incongruities of feudal references in a modern setting.

Mezzo-soprano Varduhi Abrahamyan excels vocally as the louse Polinesso and convinces us to dislike him intensely. Soprano Ambur Braid displayed impressive tone and range as the foolish Dalinda.

The opera calls for a number of ballet sequences but the dancing in this production is mercifully cut to a minimum. Jones does add some puppet sequences which, if I understood them correctly, show Ariodante and Ginevra consummating their marriage and having children. It’s done very tastefully but struck me as quite incongruous especially considering the end of the opera as interpreted by Jones.

The set by Designer Ultz is quite brilliant. The whole production is done on a single set that shows a small entrance on the right leading to the large room with the table. Ginevra’s bedroom on the right is separated by an imaginary door and it all works superbly.

Johannes Debus, the COC’s Music Director, conducts the COC Orchestra to the high standard that we have come to expect.

At four hours Ariodante approaches Wagnerian length and there were people in the audience who would not have objected if some of the arias with the numerous repetitions were made a bit shorter.

Near the end of the performance when we expect the inevitable reconciliation and celebration of the nuptials of our hero and heroine, Jones has something else up his sleeve.
A large banner is brought on the stage with the Biblical quotation: “And the Lord God said: It is not good that the man should be alone. I will make him a helper fit for him.”

Dalinda steps outside and is no longer part of the festivities.

Ginevra takes a suitcase and goes out on the road trying to thumb a ride.

In a single stroke the entire tenor of the opera is changed. Ginevra and Dalinda rebel against the conventions stipulated by the libretto. They become free woman.


Ariodante by Georg Frideric Handel is being performed seven times between October 16 and November 4, 2016 at the Four Seasons Centre for the Performing Arts, 145 Queen Street West, Toronto, Ontario. Tel:  416-363-6671. www.coc.ca
Posted by James Karas at 1:11 AM