Michel Tremblay’s Hosanna was first produced more than forty years ago and has become a Canadian classic. In Canada that could mean it collects higher quality dust on the shelf but in Hosanna’s case the dust seems to be blown off fairly frequently. Soulpepper quite rightly reminds us of this masterpiece of Canadian theatre.

Hosanna is about the pursuit of a dream. Like most such pursuits, it is doomed to disappointment and crushing failure but the purser does not know that until after the fact. The current production captures the pursuit, the failure and the glimmer of hope in the lives of the two characters of the play. 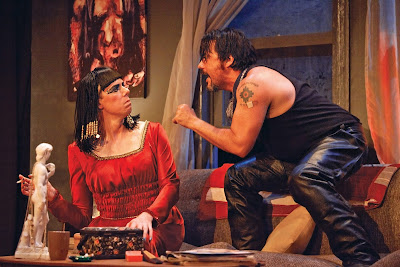 Damien Atkins & Jason Cadieux. Photo by Bronwen Sharp
Claude (Damien Atkins) comes from small town in Quebec and realizes at an early age that he is gay. His life becomes a nightmare and at age 16 he moves to Montreal, the big city. He becomes a hairdresser and a transvestite and takes up with Raymond (Jason Cadieux) a tattooed, macho biker. They occupy a run-down bachelor dump and live in the social underbelly of society.

Claude becomes Hosanna in that world watches Elizabeth Taylor in Cleopatra and dreams of emulating her. He gets a chance to do that and make a big splash in the transvestite community when he and Raymond (who has become Cuirette) are invited to a costume Halloween party.

Atkins gives a remarkable performance as Hosanna. He sports a slight French accent (as does Cadieux) to indicate that he is French Canadian. He is sharp-tongued, aggrieved, and ambitious. Gay, transvestite, abused and abusive, he is a man trying to come to terms with himself. Atkins reveals the amazing inner world of Hosanna.

Cadieux as Cuirette emotionally is equally at sea. His machismo, leather jacket and bike do not hide the fact that he depends on Hosanna for his livelihood and age is catching up with him as much as it is with Hosanna. He is a pathetic being trying to pretend that he is a tough guy. 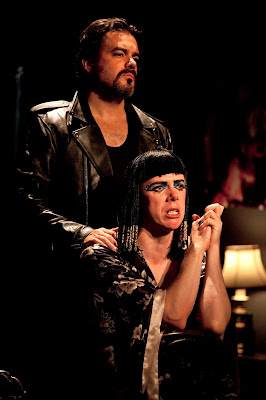 Damien Atkins & Jason Cadieux.  Photo by Bronwen Sharp
Tremblay takes us through the conflicts between Hosanna and Cuirette as he paints a horrifying picture of the world of gays and transvestites in the lower depths of Montreal. By the end of the play, they reach a resolution or at least gain some insight into their lives.

Director Gregory Prest brought out the dramatic part of Hosanna well. But there is considerable humour in the play and the production missed just about all of it.

The set by Yannik Larivée, with the flashing neon sign outside, the ugly convertible couch and cheap furnishings of the apartment struck the appropriate note for the atmosphere of the play.

Hosanna is a moving and powerful play that has lost none of its punch over the decades. That is a good definition of a classic and a good description of the Soulpepper production.
__________


Hosanna by Michel Tremblay translated by John Van Burek and Bill Glassco continues until October 15, 2016 in the Michael Young Theatre at the Young Centre for the Performing Arts, 55 Tank House Lane, Toronto, Ontario. www.soulpepper.ca
Posted by James Karas at 7:32 PM