YOU WILL REMEMBER ME – REVIEW OF ARCHAMBAULT’S PLAY AT TARRAGON

You Will Remember Me is the painfully ironic title of Francois Archambault’s play and of a song by Yvette Giraud (“Tut te souviendras de moi”) that tell of our hopeless attempt to grasp something of our human existence: a memory. We are on the cusp of the terrible moments when we are losing our memory and staring our descent into the darkness of Alzheimer’s. If we cannot remember, we at want at least to be remembered. 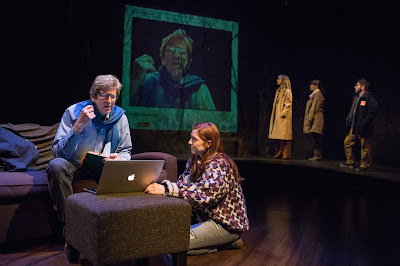 R.H. Thomson, Michela Cannon, Nancy Palk, Kimwun Perehinec, Mark McGrinder.
Photo: Cylla von Tiedemann
You Will Remember Me is a moving, humorous and terrifying portrait of Edouard (H.R. Thompson), a retired professor, a brilliant man and a prominent public figure, who is losing his memory and, as he himself puts it, has one foot in the void. He will soon live in an endless present moment recognizing no one and remembering nothing.

Edouard’s wife Madeleine (Nancy Palk) can no longer endure his loss of memory and mood changes. She takes him to their daughter Isabelle (Kimwun Perehinec) and takes up with another man. Isabelle leaves him with her partner Patrick (Mark McGrinder) who goes to play poker with his friends and lets his daughter Berenice (Michela Cannon) look after Edouard.

Edouard forgets everything that happens around him almost instantly and becomes tiresome to the persons he is with. He never loses his sense of humour and has some moments of lucidity as his downward spiral continues. It is a frightful and sobering sight.

This is an extraordinary play with a superb cast giving outstanding performances. Joel Greenberg’s directing shows sensitivity and subtlety. It must never seem that Edouard’s family is abandoning him even if all of them pull away. They love him but have difficulty putting up with him. In the end he will leave them by not knowing who they are and they will have to take extreme measures when it becomes impossible to live with him. It is that delicate balance that Greenberg maintains with mastery.

Thomson’s Edouard is a proud man who knows how brilliant he is. He could recite parts of Homer. He makes funny remarks about losing his memory. He was also a man engaged in Quebec politics and the sovereignty movement who can remember that his daughter was conceived the night Rene Leveque’s Parti Quebecois was elected to power. Thomson’s performance is pitch-perfect.

Cannon as Berenice starts as a venal young woman but becomes sympathetic when she discovers that he had another daughter who committed suicide. He confuses the two women but in the end there is a scene that approaches the sublime. Even with both feet in the void Edouard finds comfort in seeing the woman who is no longer known to him.

McGrinder gives a fine performance as Patrick. His patience is tried but Patrick never loses his decency. Isabella is far more impatient than him. Nancy Palk as Madeleine leaves Edouard but does not cease to be decent. Archambault keeps our focus on Edouard and does not provoke unnecessary sympathy by portraying him as a man abandoned cruelly by his family as he descends into mental illness.

The set by Denyse Karn consists of little more than a couch for the living area and indication of a treed yard or forest in the back.

The final effect is that of a moving play that gets outstanding performances, superb directing and provides a great night at the theatre.
______

You Will Remember Me by Francois Archambault opened on March 9 and will play until April 10,  2016 at the Tarragon Theatre, 30 Bridgman Ave. Toronto, Ontario.  www.tarragontheatre.com
Posted by James Karas at 3:15 PM