Federico Garcia Lorca’s Blood Wedding is based on one of the simplest and oldest of plots. A groom is about to marry a bride who is in love with another man. After the wedding the bride runs off with the man that she loves. The jilted groom gives chase and we have the inevitable tragic ending.

This is the story that Lorca took from a newspaper clipping and turned into a complex, poetic and brilliant play that examines Spanish society in the 1920’s. The play reaches from rural Spain to Ancient Greek drama in its elemental power and emotional depth. 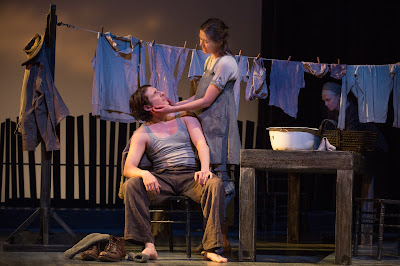 Colin Palangio, Courtney Ch'ng Lancaster & Deborah Drakeford. Photo Cylla von Tiedemann
Soulpepper’s production, directed by Erin Brandenburg, has attempted to tackle the poetic and emotional complexities of the play with limited success. The fundamental problem, I think, is the failure to find the proper emotional wavelength and poetic style for the play.

In the first scene we meet the Mother (Diana D’Aquila - the characters have no names except for Leonardo), a woman whose husband and son have been killed and is afraid that the same may befall her son the Groom (Gordon Hecht). The Mother should express deep emotional pain and fear. Diana D’Aquila goes some way but speaks a bit too quickly and does not reach the emotional depth that the play calls for.

In the second scene we move from the naturalistic scene with the Mother, the Groom and the Neighbour (Caroline Gillis) to the home of Leonardo (Colin Palangio), his Wife (Courtney Ch’ng Lancaster) and her Mother-in-Law (Deborah Drakeford). The scene begins and ends with a lullaby for the baby that is reminiscent of a choral ode. There is a domestic argument in the middle between the Husband and the Wife about his behaviour. Most of the poetry is simply lost.

When the lights go on, we see a couple of musicians on stage and hear music composed by Andrew Penner. I found very little in the music that resonated with the poetry. At one time the music descended to the beat of a hoedown and at others the singing and the music were dangerously close to simple cacophony. The elegiac verses of the lullaby as well as the poetic lines recited by the Moon (Andrew Penner), the Bride (Hailey Gillis) and Leonardo later in the play lost most of their effect. 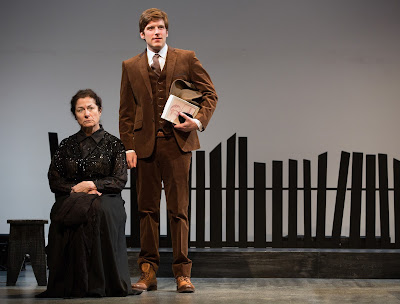 Diane D'Aquila & Gordon Hecht. Photo Cylla von Tiedemann
The only way to express the tragic end of the play is through the elegiac verses. Any attempt at expressing the grief of the Mother, the Bride and the Wife through conventional weeping and wailing is bound to strike us as melodramatic. Lorca composed lines that evoke the suffering of Christ and the destruction wrought by a small knife (an image from the first scene). The scene should be cathartic but in this production it was only moving.

Lorca gave some specific instructions about the sets. The Groom’s room is yellow; Leonardo’s room is pink; the interior of the Bride’s cave is white; the final scene is in a white room with arches resembling a church. Set and Costume Designer Anahita Dehbonehie has pared all of this down to a simple set with a wide open sky in the background. The lighting obviously changes when the Moon appears. The costumes do not seem to indicate any particular location. The Neighbour who is dressed in black with a black kerchief could be in most Mediterranean countries. The set and costumes did not pose any problems.

In the end, however, the griefs and poetry of this difficult but great play are largely missing. How disappointing.
_________
Blood Wedding by Federico Garcia Lorca in a translation by Guillermo Verdecchia opened on March 15 and will run until April 9, 2016 at the Young Centre for the Performing Arts, 55 Tank House Lane, Toronto, Ontario. www.soulpepper.ca
Posted by James Karas at 2:00 AM