Goodnight Moon is the perfect play for, as they say, children of all ages. It’s about putting a child to bed. What child or parent cannot remember the procedures, routines, resistances and imaginative tricks practiced by the frequently opposed sides in this daily ritual? The parents want success and respite. For the child, bedtime means finding ways to postpone it.

Goodnight Moon is based on the book by Margaret Wise Brown and Clement Hurd that Chad Henry has turned into a delightful musical. The production, directed by Linda Hartzell for the Seattle Children’s Theatre has been imported by Young People’s Theatre for performances in Toronto. 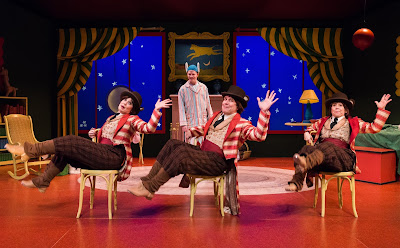 L-R: Molli Corcoran, Mike Spee, Auston James and Vickielee Wohlbach. Photo by Jeremie Andrew.
The child being put to bed is in fact a bunny called Bunny and played delightfully by Mike Spee. We see the moon and the stars in his room; there is a small house and pictures of three bears, a fishing rabbit and a cow trying to jump over the moon. There is a Mouse, a Cat, a Tooth Fairy, a Dish and an Old Lady. The latter (played by Vickielee Wohlbach) tries to get Bunny to go to sleep.

The Mouse and Cat (puppets handled by Molli Corcoran) are not sleepy and they want to play. The three bears (Corcoran, Auston James and Wohlbach) come out of the picture hanging on the wall and do a song and dance routine. A huge book slides on the stage and a story comes out of it. Great fun but no sleep for Bunny.

Who does a child blame for everything that s/he may be blamed for? Nobody, of course. Mr. Nobody appears as a shadow dance behind a scrim and the audience is fascinated by the routine.

Bunny has a loose tooth which (a) must be extracted and (b) placed under his pillow for the Tooth Fairy. Tie the tooth to a ball of yarn and …

The humour is broad and some of the lines go over the heads of the young audience. When the fireplace ornament speaks, Bunny says “that burns” me.  A few puns like that are lost on many youngsters but who cares.

The music (played by pianist Jeff Bell) is tuneful, melodic, and wonderful. The dance routines by Choreographer Marianne Roberts carry the story and like all the episodes of the play do not allow for interest in what’s on stage to flag. We are talking about some five year olds who may well have a ten-second attention span but they are all kept entertained. 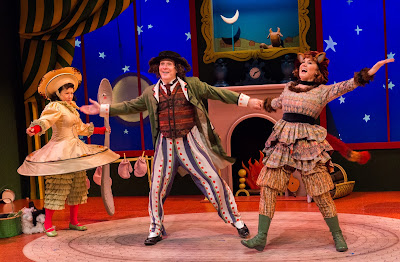 L-R: Vickielee Wohlbach, Auston James and Molli Corcoran. Photo by Jeremie Andrew
I saw a “relaxed performance” of the production on March 5. According to YPT, these “performances are specifically designed for young people with Autism Spectrum Disorder (ASD). …Relaxed performances may include adjusted sound and lighting levels…Young people are welcome to leave the theatre and to use any devices, food or fidget tools, as needed during the performance.” The audience was enthusiastic and very well behaved. As becomes young people, they were instant critics of all that went on stage and their criticism was all positive.

The cow in the picture had to try to jump over the moon. Her failure to make it brought a heartfelt “aaahhhs” of disappointment. (Spoiler alert) on the third try the cow makes it and you can guess the reaction.

As usual, I was accompanied by Emily, my Associate Director (“I am eight now”) who gave the production her seal of high approval. During question period after the performance, she wanted to find out how the characters come out of the book but did not get a chance to ask.

On asked what she would do with the lamp that swiveled wildly and Bunny could not catch it, she gave me the surprising answer: “Kill it.” But she does know how to fall asleep; “I close my eyes and think of nice things.”

One of the nicest things will no doubt be Goodnight Moon in the superlative production by Seattle Children’s Theatre.
______


Goodnight Moon by Chad Henry (book, music and lyrics) based on the book by Margaret Wise Brown and Clement Hurd continues until March 19, 2016 at the Young People’s Theatre, 165 Front Street East, Toronto, Ontario. 416 862-2222. www.youngpeoplestheatre.ca
Posted by James Karas at 10:36 AM