THE JUST – REVIEW OF CAMUS’ PLAY AT SOULPEPPER

It is March 2016 and we are in an apartment in Kabul where five terrorists are planning to assassinate a high ranking official. They are bearded, turbaned and dark-skinned, and although they have some difference of opinion they are dedicated to killing a member of the ruling class because they love justice and want to return their country to the people.

They belong to an Organization and espouse its doctrines and obey its rules. One of them is the accepted leader and they are getting ready to toss a bomb at the official’s car. The bomb thrower is prepared to die in the act but he would prefer to survive the attack and be caught. That way he will die twice for the justice that he so ardently seeks: once when he is caught and once when he is executed. 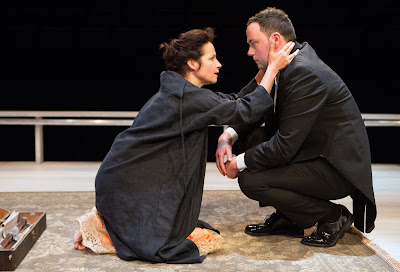 Raquel Duffy & Gregory Prest. Photo: Cylla von Tiedemann
All of them do what they do because they love the people, they hate oppression and they are convinced they are the harbingers of justice. There is no evidence that the target of their assassination has done anything unjust or oppressive – he simply belongs to the ruling class and that is enough to justify his killing.

It is unlikely we would know that much about these terrorists but if we learned what they did and their objectives, we may have no difficulty is describing their act as fundamentally evil. We would consider them members of ISIS and our immediate reaction would be to consider them murderers.

Now change the date to 1905 and set the scene in Moscow where five revolutionaries are plotting the assassination of a Grand Duke. That is where Albert Camus set his 1949 play The Just and my reaction to the terrorists was quite ambivalent.

Director Frank Cox-O’Connell (and Camus) gives us a sympathetic but not one-sided view of these people who are dedicated to fighting for justice but also have characteristics of fanaticism and the pursuit of martyrdom without much logical or strategic thinking.

Yanek (played passionately by Gregory Prest) is a poet who believes in justice and is ready to die for it. When he is about to toss the bomb to kill the Duke, he stops upon seeing two children in the carriage. Killing the Duke is one thing; murdering children is quite another.

Stepan (played like a true party apparatchik by Brendan Wall) has spent time in jail and has been tortured. He has become a killer and is prepared to obliterate anyone who stands in the way of the revolution. He is fighting for the people.

Boris (Diego Matamoros) is the leader of the group and he is reasonably sympathetic. Peter Fernandez plays the young Voinon who finds out he lacks the killer instinct despite his devotion to the revolution. Raquel Duffy turns in a superb performance as the bomb maker of the group. She shares everyone’s passion for justice but she has not lost her humanity at all.

The plot succeeds but the killer is caught. The lesson that Camus gives us is that counterterrorism breeds more terrorism. These assassins become more fanatical and less human when their mates are caught, tortured or executed. Their dedication to justice remains intact, at least in their minds, but their dedication to murder almost anyone who seems to belong to the other side is just as intense.

The production is done in the small Michael Young Theatre turned into a theatre-in-the round with the stage in the centre. The set by Designer Ken MacKenzie is Spartan but effective. The jail scene with the chains and the lighting (by MacKenzie) and is excellent.

It would be difficult to imagine a more timely play and the production is provocative and an extremely worthwhile trip to the theatre.
__________
The Just  by Albert Camus translated by Bobby Theodore opened on March 10 and will play until March 26, 2016 at the Young Centre for the Performing Arts, 55 Tank House Lane, Toronto, Ontario. www.soulpepper.ca
Posted by James Karas at 2:47 PM