The Last Wife is a provocative, dramatic and thoroughly enjoyable non-historical drama. The Stratford Festival has staged Kate Hennig’s play at the small Studio Theatre near the end of the season. It has saved the best for last and the play should receive many more productions.

The last wife of the title is Katherine Parr, the last spouse of King Henry VIII who nursed him in the last years of his life and survived him. 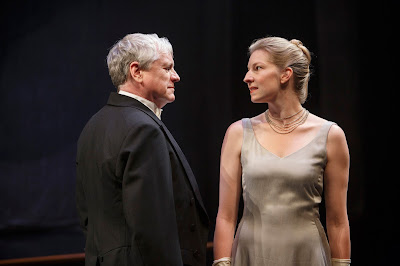 Joseph Ziegler as Henry and Maev Beaty as Kate in The Last Wife. Photography by David Hou.

Hennig’s Kate is intelligent, well educated, strong, passionate, principled and (most of the time) politically astute. She lives in a patriarchal society where women are considered as sexual objects when it pleases men and as chattels when it suits them. Maev Beaty incorporates all these characteristics in her bravura performance.

Henry VIII is an arrogant dictator who does not brook any disagreement, rules by whim and has the power and the ability to execute almost anyone. Hennig does give him some redeeming characteristics such as his love of music and his ability to change his mind but they do not detract from his essential being of a capricious thug with a crown.

Joseph Ziegler does a masterful job as Henry. His Henry may be the lion in winter but he has lost none of his brutality and selfishness. We are told that Henry is overweight but Ziegler is a fairly fit king.

Kate and Henry dominate the play with Bess (Bahia Watson), the future Queen Elizabeth I and Mary (Sara Farb), the future Queen “Bloody” Mary playing important roles in the fractured relationships  of the “family.” They are angry, rejected, hateful and bitter as Henry’s daughters whom he considers bastards.

The young Jonah Q. Gribble plays Eddie, the future King Edward IV and Gareth Potter is the passionate Thom Seymour who is in love with Kate.

Kate tries to navigate the shoals of a society that is closed to women, a husband who is capable of having her executed and his children with whom she tries to establish meaningful contact. A warrant is issued for her arrest and she uses her sexual attraction to avoid being beheaded.

The play is not a costume drama set in 15th century England. It is a modern play with the actors wearing contemporary costumes and speaking with Canadian accents. Director Alan Dilworth delivers the wit, fast-paced drama, intelligence and sheer theatricality of Hennig’s play faultlessly.

The names and a few of the events in the play are historical but almost all the rest comes from Hennig’s imagination.

The Last Wife by Kate Hennig played until October 9, 2015 at the Studio Theatre. Stratford, Ontario. www.stratfordfestival.ca
Posted by James Karas at 2:43 AM