Opera Atelier is celebrating its 30th Anniversary Season with a revival of Jean-Baptiste Lully’s Armide. And why not? Co-Artistic Directors Marshall Pynkoski and Jeannette Lajeunesse Zingg know a good thing when they see it.

The last production of Armide in 2012 went to the Glimmerglass Festival in Cooperstown, New York. The current revival is travelling to the Royal Opera House at the Palace of Versailles in November. 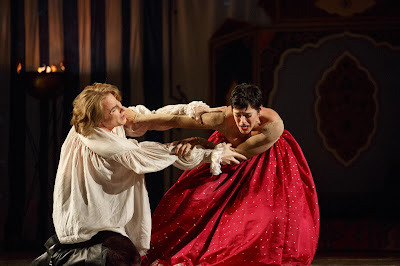 Colin Ainsworth (Renaud) and Peggy Kriha Dye (Armide). Photo by Bruce Zinger
Armide premiered in Paris in 1686 and it has characters with magical powers, demons, a visit to the Underworld and a Water Nymph. And that is an incomplete list. We have Renaud, a Christian virgin knight versus Armide, a Muslim, virgin warrior. She is a sexual magnet who is immune to attraction (except to Renaud) and Renaud who is just as immune except when influenced by magic. You get the idea.

Armide is opera as well as ballet and the problem is how to get everything on stage and have a successful production. You need magic. This production is a masterly exercise in operatic and balletic magic by Pynkoski and Lajeunesse Zingg. The style is, we assume, high baroque and Lajeunesse Zingg as choreographer inserts graceful dance routines that blend with the action. Did I say it is magical?

Soprano Peggy Kriha Dye is Armide, the virgin princess who has walloped the Christians during the First Crusade but has not captured Renaud, the greatest knight whom she hates and loves. Today we would call her conflicted but don’t tell Lully that. Kriha Dye gives us a well-crafted portrait of the tragic princess.

Tenor Colin Ainsworth is the perfect Baroque opera hero and with his beautifully toned voice, the ultimate heroic knight. Armide’s magic magnetism makes him fall in love with her but his knights manage to break the spell with their own brand of magic. 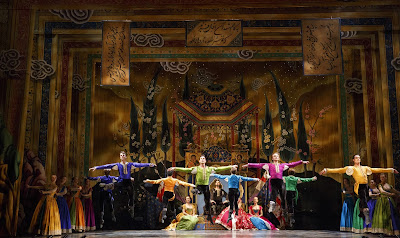 The company of Armide. Photo by Bruce Zinger
The cast gave noteworthy performances. Carla Huhtanen and Meghan Lindsay were elegant and vocally beautiful as Armide’s companions. Baritone Daniel Belcher sang Hatred and guarded the Underworld with verve and panache. Bass-baritone Stephen Hegedus did a fine job as Hidraot, Armide’s uncle who recommends marriage for her.

The set by Gerard Gauci, the lighting by Bonnie Beecher and the costumes by Dora Rust d’Eye show fine eyes for colour, elegance and variety. The opera may be set in medieval Damascus but we see the splendours of Versailles on stage from the gorgeous gowns to the graceful dancers of the Atelier Ballet.
David Fallis conducts the Tafelmusik Baroque Orchestra performing to its usually high standards Lully’s score on original instruments.

If you feel you are impervious to opera the way Renaud and Armide thought they were impervious to love go and see this production and you will find yourself begging for more.
____

Armide  by Jean-Baptiste Lully with libretto by Philippe Quinault based on Torquato Tasso’s  Jerusalem Delivered opened on October 22  and be performed six times until October 31, 2015 at the Elgin Theatre, 189 Yonge Street, Toronto, Ontario. www.operaatelier.com
Posted by James Karas at 12:56 AM