During the overture to the current production of La Traviata by the Canadian Opera Company, we see a woman putting on a fancy gown before the guests arrive for a fancy party. The guests enter the semicircular room with a large table in the middle. Director Arin Arbus and Lighting Designer Marcus Doshy let us see the guests but they also emphasize their shadows against the back wall. Are they more shadows than real people?

The woman putting on the gorgeous gown is the courtesan Violetta and is she simply, to paraphrase T. S. Eliot’s Prufrock, preparing a face to meet the faces that she will meet? Is she also a shadow until she falls in love and for a brief interlude in her life becomes a human being? We will see the shadows of people again but let’s examine the rest of production first. 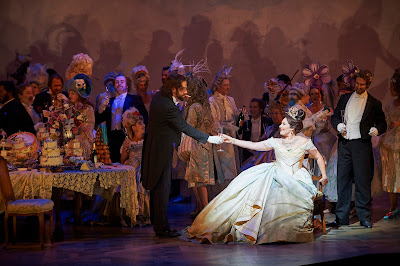 Robert Gleadow as Dr. Grenvil and Ekaterina Siurina as Violetta. Photo: Michael Cooper
La Traviata requires a soprano with considerable vocal and emotional range, a tenor who can be convincingly passionate and a baritone of gravitas and vocal resonance.

The Canadian Opera Company has scored a home run with Russian SOPRANO Ekaterina Siurina as Violetta. She establishes dominance quickly and her expressive voice goes from the flirtatious to the passionate and finally to a heart-breaking scene. The flirtatious shadow has become a woman of passion, generosity and nobility.

Baritone Quinn Kelsey sings the role of Giorgio Germont, the father who must convince Violetta to leave his son. His daughter’s engagement will be called off if her fiancée finds out Violetta’s former profession. The role requires vocal splendour, conviction and emotional strength to convince a woman to abandon her true lover. Kelsey has it all.

Kelsey sings “Di Provenza il mar il suol,” one of the most famous and familiar arias in the repertoire. The father appeals to his son’s loyalty to native land, home, family and his sense of honour. Kelsey captures the emotional appeal and resonant beauty of the area with splendour. 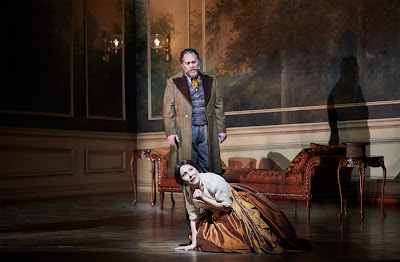 Quinn Kelsey as Germont and Ekaterina Siurina as Violetta. Photo: Michael Cooper
Tenor Charles Castronovo was good but not entirely successful as Alfredo Germont, Violetta’s lover. His voice may be fine but he did not find the emotional wavelength that we expect of a man deeply in love.

The overall production is excellent and highly interesting. As I said, the first scene at the party in Violetta’s apartment featured an unadorned background where the silhouettes of the guests were projected. The set for Violetta’s and Alfredo’s country house consisted of two painted panels and a settee. For the final scene, we return to Violetta’s barren apartment where Verdi finds a way to release pathos, beauty, defiance, love and emotion of surpassing splendour.

Unlike Prufrock, Violetta and Alfredo have found love, they have heard the mermaids sing to them, they have ceased being mere shadows of human beings and amid the sorrow, guilt and pain of the final scene, Violetta cries out a defiant “gioia” with her last breath.

The COC Orchestra is conducted by Marco Guidarini.


La Traviata by Giuseppe Verdi opened on October 8 and will be performed a total of eleven times until November 6, 2015 at the Four Seasons Centre for the Performing Arts, 145 Queen Street West, Toronto, Ontario. Tel:  416-363-6671. www.coc.ca
Posted by James Karas at 2:57 AM