Hana’s Suitcase has everything that you want to see in a production by Young People’s Theatre. It may be no coincidence that it marks the opening of the 50th anniversary season of YPT.

It has a mind-opening, indeed a mind-expanding story for youngsters. Hana was a Jewish girl from Czechoslovakia who was taken to Auschwitz by the Nazis. Her suitcase ended up in the Holocaust Learning Centre in Tokyo. Two Japanese children and the director of the Centre became captivated by the story behind the suitcase and went on a search for Hana. Japanese children looking for Holocaust victims from Japan to Europe, that’s what I call mind-expanding. 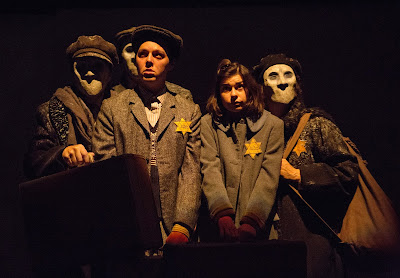 L-R: Noah Spitzer and Caroline Toal with the ensemble. Photo by Cylla von Tiedemann.
The play is based on Keren Levine’s book adapted for the stage by Emil Sher and it is recommended for children who are 10 years old and up. That seems like the right age to introduce them to intolerance, bigotry, brutality and absolute evil.

The young audience sees what I suspect is not a frequent occurrence for Canadian middle class youngsters: Japanese children who act the same way children act all over the world. True the multicultural nature of our schools has caused many stereotypes to disappear but we still have a long way to go. In the play we have Akira (Jeff Ho) and Maiko (Lisa Truong) whose boundless curiosity and enthusiasm about the story behind Hana’s suitcase is so infectious, it impels Fumiko (Jennifer Villaverde) to search around the world for information about Hana Brady.

She eventually finds Hana’s brother George (Noah Spitzer) who lives in Canada and he gives her, Akira and Maiko information about Hana and his family.

We see photographs and a reenactment of the happy family life of Hana (Caroline Toal), her brother George and their parents Marketa (Tracey Ferencz) and Karel (Jeff Miller) as the dark clouds of the holocaust begin descending on them. They are all rounded up by the Nazis and three of them end up at Auschwitz. The telling is appropriately restrained but the story and the message are clear.

Jeff Ho dominates the production with his driving keenness and zeal to find out Hana’s story and just about everything else. The audience identified with him and loved him. Truong as Maiko is no less enthusiastic but she is more sensible and down to earth than Akira. They are a delight to watch and give marvelous performances.

Villavarde as Fumiko is infected by the children’s enthusiasm and she does everything possible in her search for Hana’s story.

Fumiko’s search leads her to Kurt (Thomas Hauff) who informs her that George is alive and the quest culminates in the learning the tragic information so desperately wanted and feared.

Hana’s Suitcase tells a great story with restraint and finesse. Director Allen MacInnis tells the horrible tale but he does not neglect the sine qua non of young people’s theatre – humour. Akira provides most of the laughter with his ambition to write poetry, his somersaults and his desire to change the world.

I was accompanied by Emily, a feisty seven-year old whose father had some trepidation about letting her see a play about the Holocaust. There was no cause for concern. Emily gave the production a review that should stand as a high compliment to YPT. She liked the show but, she said, “this was the first time I saw a story that did not say they lived happily ever-after.”
______

Hana’s Suitcase by Emil Sher based on the book by Karen Levine opened on October8 and will play until October 30, 2015 at the Young People’s Theatre, 165 Front Street East, Toronto, Ontario. 416 862-2222. www.youngpeoplestheatre.ca
Posted by James Karas at 7:14 PM