A COMPLIMENT: The Stratford Festival gives us a robust, superbly acted and splendidly directed production of Ben Jonson’s The Alchemist at the Tom Patterson Theatre.

A COMPLAINT: Well, let’s leave that for later.

The Alchemist was first produced in 1610 and is invariably accepted as one of the masterpieces of English drama. It is set in 17th century London and has a wide range of references and language and jargon pertaining to the fake science of alchemy that are not always easy to follow by a modern audience. But Director Antoni Cimolino drives a truck through all of that with a first-rate cast that generates energy and humour from start to finish. 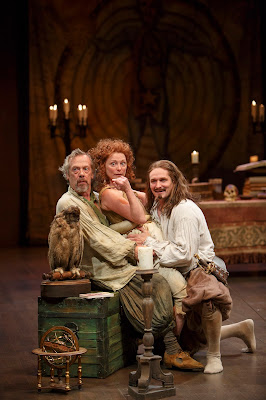 From left: Stephen Ouimette as Subtle, Brigit Wilson as Dol Common and Jonathan Goad as Face. Photography by David Hou.

The world of The Alchemist is divided into two types of people: the swindlers and the swindled. In the absence of the owner, a servant and his two partners take over a house and turn it into a fraudsters’ paradise. Subtle (Stephen Ouimette) is the alchemist who can instruct on how to establish a successful business, quarrel like a slick gentleman, make a fortune in gambling, marry a wealthy widow and become wildly wealthy by having all your pots and pans turned into gold. And much more. Jeremy, the servant who provides the house and names himself Face (Jonathan Goad), is the rainmaker/businessman who is quick of mind, tongue and foot. Dol Common (Brigit Wilson) is the peace maker and piece provider who completes the trio of scammers supreme.

Ouimette, Goad and Wilson give excellent performances. They exude energy and feed off each other as the characters they play go through various transformations to keep up with the demands of their customers and one step ahead of being discovered. Ouimette deserves extra kudos because he has the biggest and toughest role to play.

They are ready for the dupes. Scott Wentworth plays Epicure Mammon, the greediest and the funniest of them all. His puffed up costume makes him look as if he could fly away if he were not full of blubber. Mammon’s greed has no bounds. He fantasizes that the philosopher’s stone of the alchemist will give him wealth, love, honour, long life and victory. With it he will be able to turn an old man into a child. Wentworth’s performance was equal to Mammon’s exuberant fantasies with one minor glitch. As the audience was enjoying his performance, Wentworth momentarily slipped out of character for a cheap laugh. 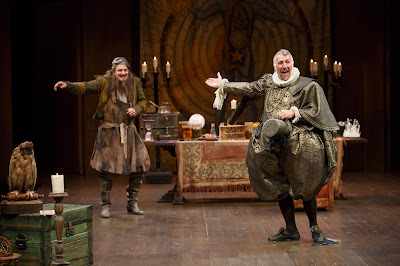 Jonathan Goad (left) as Face and Scott Wentworth as Epicure Mammon. Photography by David Hou
Randy Hughson, with his gravelly voice, was highly entertaining as pastor Tribulation. Antoine Yared, dressed in a barrister’s gown and wig, played the greasy law clerk Dapper who wants to get lucky in gambling, so lucky in fact that the other gamblers won’t have enough money left to buy dinner.

Steve Ross plays the innocent and not-too-bright Drugger who wants business advice about his new tobacconist shop. He gets nothing and loses a lot but Ross’s acting gives a great deal of pleasure to the audience.

Give kudos to Wayne Best as Surly, Mammon’s sidekick, who is smart enough to want to catch the fraudsters. He disguises himself as a Spaniard, falls for the dumb Dame Pliant (Jessica B. Hill) and in the ends gets nothing.

Antoni Cimolino deserves the greatest credit for the success of the production. The play opens on a high note as Subtle and Face argue vigorously about billing, one could say. Subtle is on the toilet and he grabs the pot wherein he did his job and threatens to toss it on Face. Hilarious invention by Cimolino.

Then the dupes start arriving, first singly and later in pairs or more. Cimolino sets the pace and there is a build-up of energy and laughter as the plot thickens and eventually explodes.

THE COMPLAINT: Ben Jonson was a contemporary of Shakespeare and is usually considered only second to him in the quality of his output. Take a guess and count on your fingers how many productions of his plays the Stratford Festival has offered since 1953. One hand will do.

We had to wait until Jean Gascon became Artistic Director in 1969 for the first production of a play by Jonson in Stratford. We got The Alchemist and two years later Gascon gave us Volpone with William Hutt.

The next coffee break lasted until 1999 (count fingers, toes and other appendages for numerical precision) for another Jonson play and got The Alchemist and a mere ten years later we saw Bartholomew Fair directed by Cimolino. Two plays by Jonson in six years may seem like a feast when in fact it is a disgrace. The same holds true of productions of the plays by Shakespeare’s contemporaries but that’s another subject.

See Cimolino’s The Alchemist and you will realize what we are deprived of.
______

The Alchemist by Ben Jonson opened on August 15 and will run in repertory until September 19, 2015 at the Tom Patterson Theatre, Stratford, Ontario. www.stratfordfestival.ca
Posted by James Karas at 11:09 AM