The Glimmerglass Festival, on the shores of Lake Otsego, near Cooperstown, New York, is delivering four major opera productions for its fortieth season. They are Verdi’s Macbeth, Mozart’s The Magic Flute, Vivaldi’s Cato in Utica and Leonard Bernstein’s Candide. 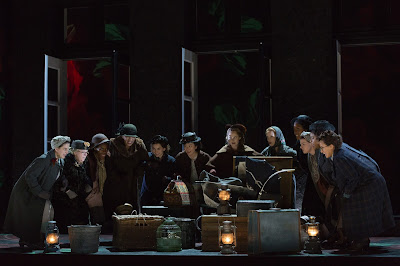 Director Anne Bogart shows what a fertile imagination and intelligence can do with an old chestnut and not one of Verdi’s best operas, Macbeth. As the orchestra starts playing the overture, we see some women near the stage as other women go down the aisles greeting each other. They are working class women, wearing hats and carrying bags. All twelve get on the stage and we realize that they are the witches.

In the first scene in Macbeth’s castle, they emerge wearing servants’ clothes. They are the maids in the Macbeth household. No wonder they know so much about the Macbeths. When Lady Macbeth finishes reading the letter from her husband she hands it over to one of the maids/witches. Almost the last word in the opera is sung by the same dozen witches, lined up on the stage as at the beginning. They sing a hymn of praise and love to God. Now that is irony. Brilliant.

Soprano Melody Moore as Lady Macbeth dominates the singing of the production. She is domineering, powerful and vocally superb. She belts out her notes like stingrays with authority and evil splendour. The only problem I had with her was during the sleepwalking scene. The horn that punctuates her singing was a bit louder than her voice and I found it slightly disconcerting.

Bass baritone Eric Owens as Macbeth made a fine contrast to Lady Macbeth. He is supposed to be bloody, bold and resolute but, to use an á propos term from the world’s baseball capital, he was 0 for 3. Owens’ Macbeth has ambition but not the stomach for it. He stoops, he crouches and goes down on his knees like a tyrant who lacks the total evil and bearing displayed by his wife. Owens’ rumbling voice served him well in a fine performance. 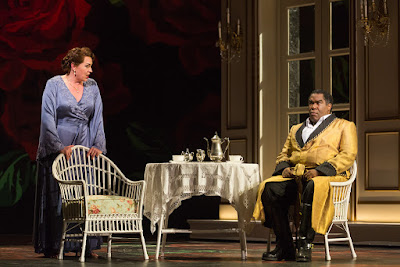 Bass Soloman Howard provides another example of contrast. Unlike Macbeth, he is straight-backed with a martial bearing and commanding vocal performance.  He sings his great aria “Come dal ciel precipita” (How the shade falls from heaven) with sterling resonance.

The production is done in modern dress circa 1940s and the supernatural is eschewed. The witches, as I said, are “ordinary” women with a huge streak of nastiness. They know how Macbeth and Lady Macbeth think and they can predict the future by reading their employers’ minds. When Verdi said that Macbeth has only three characters, Macbeth, Lady Macbeth and the Witches he was pointing to the psychological truths represented by the latter rather than any supernatural powers they may be deemed to possess. Bogart has capitalized on this idea with marvelous results.
The scenery by James Schuette is minimalist. The walls of the stage have black panels with red roses painted on them for most of the production. There is a large, revolving panel in the centre of the stage with three doors on it. It is dark on one side for outdoor scenes and is turned around to show brighter colours and lights for interior scenes. Nothing lavish but it does the job.

The emphasis in costumes, lighting and sets is on the somber and black except for the painted roses which clearly represent blood.

The Glimmerglass Festival Orchestra and Chorus come in for special praise for their brilliant performance. Huge ovations for conductor Joseph Colaneri and Chorus Master David Moody.

The final assessment is that this is a well-sung and well thought out production with some original and obviously unexpected twists that make for a terrific night at the opera.
_____

Macbeth by Giuseppe Verdi opened on July11 and will be performed ten times until August 22, 2015 at the Alice Busch Opera Theater, Cooperstown, New York. Tickets and information (607) 547-0700 or www.glimmerglass.org
Posted by James Karas at 8:59 PM