Antonio Vivaldi composed Cato in Utica in 1737 and it had its America premiere this summer at the Glimmerglass Festival. The problem is not with the quality of the opera rather than with the fact that the music for Act I is missing. There is a way of getting around it by adding some music from other Vivaldi compositions and some explanatory notes. The effort is worth it.

Cato in Utica is the loosely based story of the Roman senator who tried to stand up to the dictatorial Julius Caesar on republican principles. Cato went to Utica, Numidia in North Africa with his daughter Marzia and Emilia, the widow of Pompey whom Caesar murdered. 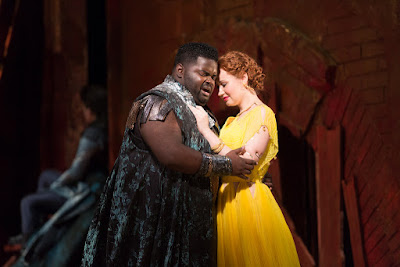 As creaky plots go, this one can use an extra dose of lubricant. You can draw a diagram of who loves or does not love whom. Cato wants his daughter to marry Arbace, the Prince of Numidia. Arbace wants to marry Marzia but she loves her father’s enemy Caesar. Caesar’s lieutenant Fulvio is in love with Emilia who wants to kill Caesar.

The opera consists of a string of solo arias connected by recitatives. There is no chorus, no ensemble singing not even a duet. The enemies and lovers walk on and off the stage without much sense of why they are there. They sing, walk off and return for their next big aria.

There are some beautiful arias and the production has a marvelous roster of singers with an unfortunate exception. I was most impressed with the performance of mezzo-soprano Sarah Mesko as the aggrieved and vengeful widow of Pompey. She wants to get Caesar. She has a velvety voice that combines flexibility, beauty and strength. She has a good stage presence and seems to be at the early stages of her career. We want to hear her again.

Countertenor John Holiday Jr. sang an outstanding Caesar after the initial surprise at his appearance. He is a muscle-bound African-American and on first sight I expected him to have a deep voice like, say, Eric Owens, whom I heard the night before. A high-pitched countertenor voice seemed incongruous but you get over the incongruity after listening to a few bars. He has a number of long arias where he expresses his love for Marzia and his disagreements with Cato. He was outstanding.

Mezzo-soprano Megan Samarin played what we would call the conflicted Marzia who is damned by her father for loving his enemy. Samarin showed great vocal and physical agility. She is one Glimmerglass’s Young Artists with a lovely voice that holds much promise. 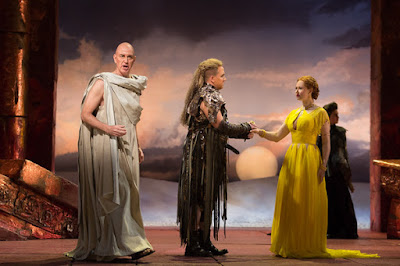 Mezzo-soprano Allegra De Vita as Fulvio and countertenor Eric Jurenas as Arbace are Young Artists as well that performed well. Both are getting early exposure that stands them and the Festival in good stead.

Tenor Thomas Michael Allen was a disappointing Cato. Baroque opera does not appear to be his forte and he seemed uncomfortable in the role and the arias assigned him came out unsatisfactorily.

The set by John Conklin consisted of what looked like a Roman ruin with an archway opening to the back. The opening provided a space for variations in lighting and vignettes of open sky and monuments.

The opera can be almost completely static with the singers stepping up to the lights, as they used to say, and singing their arias between recitatives. Director Tazewell Thompson reduces the static effect by making the singers move around the stage and interact with each other. It works.

The fine performance of the Glimmerglass Orchestra conducted by Ryan Brown was an essential ingredient in bringing to a full run an opera with a missing limb.
_____

Cato in Utica by Antonio Vivaldi opened on July18 and will be performed  nine times until August 22, 2015 at the Alice Busch Opera Theater, Cooperstown, New York. Tickets and information (607) 547-0700 or www.glimmerglass.org
Posted by James Karas at 10:23 PM