Happy Place is a new play by Pamela Mala Sinha that just premiered at Soulpepper. It is an interesting play about the lives of broken women seeking help in an upscale in-patient facility. It has some moving narratives, considerable humour and a journey into the lives of its characters.

There are six women of different ages and backgrounds in the facility who are joined by traumatic experiences. They have attempted to commit suicide and they are hoping to mend their lives with the help of therapist Louise (Deborah Drakeford) and other unseen staff of the institution. 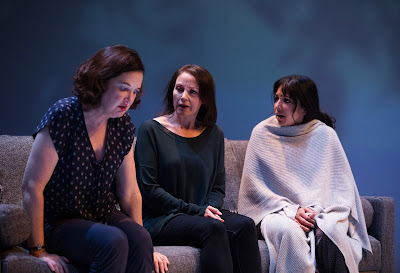 Sinha, who also plays the role of Kathleen, one of the patients, tells the stories of the women mostly through short scenes. There are almost continuous entrances and exits by the characters with some longer scenes where the narrative is developed and we are permitted longer views into the lives of these women.

Mildred (a very dramatic Diane D’Aquila) is the oldest patient. She is the victim of a botched hysterectomy and is a deeply troubled woman. Her clothes are disheveled, her hair is a mess and she  still seeks sexual pleasure with considerable humour. In the end she breaks down in the most dramatic scene of the play.

Rosemary (Irene Poole) is a woman approaching menopause who is deeply troubled by not having a child of her own while desperately trying to become a mother to her stepson. She tries to hide her emotional distress from the others but we get glimpses at the depth of her turmoil.

Samira (Oyin Oladejo) is a black woman who was raped as a child with a pillow pressed against her face. She did not see anything or perhaps she did but she cannot come to terms with remembering the event. Nina (Liisa Repo-Martell) is so intent on having a child that she produced false positive results on a pregnancy test. She is convinced that she is pregnant. Like all of the women, she is on a suicide watch.

Joyce (Caroline Gillis) smiles continuously at the beginning of the play but her smile slowly disappears from her face as she begins to face her relationship with her husband.

Drakeford’s Louise is drawn with some sympathy even though she has to be somewhat officious and stern as the overseer of the woman’s therapy. It is an incomplete and uneasy character drawing. 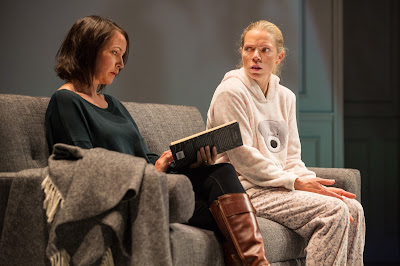 The play has a lot of ground to cover. There are six women who have been so traumatized that they want to take their own lives. Most playwrights would be content to tell the story of one of them alone at some depth without a thought to more than one, let alone six. The quick change of scenes by the characters moving on and off the stage and different plot strands being picked up every time is almost too much to absorb at times.

The set by Lorenzo Savoini consists of a white-painted room with a couch, a TV set and a kitchenette. Some changes in lighting by Lighting Designer Kimberly Purtell are used to indicate scene changes including exterior scenes.

Director Alan Dilworth has the women walk on and off the stage through the side and back entrances to the stage with precision and evinces good performances from the stellar cast.

Sinha manages to tell the stories of all the women with considerable effectiveness but there may be just too much happening and more than can be told in a couple of hours or so.
____

Happy Place by Pamela Mala Sinha opened on September 10 and will run until October 17, 2015 at the Young Centre for the Performing Arts, 55 Tank House Lane, Toronto, Ontario. www.soulpepper.ca 416 944-1740