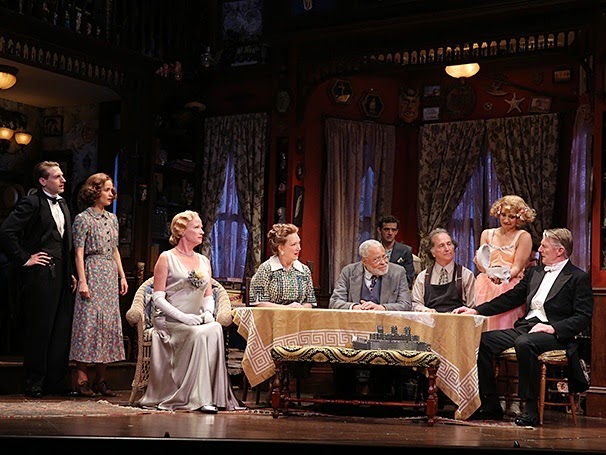 You Can't Take It With You show photos by Joan Marcus. Photographer: © Broadway.com

The current revival of You Can’t Take It With You on Broadway promised to be an outstanding production of a classic American comedy. Kaufman and Hart’s 1936 play is a marvelous escapist piece set in the days of the ugly depression.

The Roundabout Theatre Company production has an all-star cast directed by the highly experienced Scott Ellis. He tries too hard to get cheap laughs where Kaufman and Hart provided funny lines or situations and he tries to turn a fine comedy into a farce. The good news is that the production works despite his uncalled for directorial sallies.

You Can’t Take It With You is about a highly eccentric and lovable family that lives in a large house around the corner from Columbia University. Mrs. Sycamore (Kristine Nielsen) writes plays because some years ago someone delivered a typewriter by mistake. Her husband Paul (Mark Linn-Baker) and his friend Mr. DePinna (Patrick Kerr) make firecrackers in the basement. Essie (Annaleigh Ashford) takes ballet lessons from Kolenkhov (Reg Rogers), an outrageous Russian. She has been doing it for eight years and stinks, according to her teacher.

We have a drunken actress (Julie Halston), a Russian Duchess (Elizabeth Ashley) and an assortment of other characters.

The pillar of the family is Grandpa, (played by the inimitable James Earl Jones), a man who stopped working 35 years ago and is just enjoying life.

His granddaughter Alice (Rose Byrne) works on Wall Street and has fallen in love with Tony (Fran Kranz), the boss’s son. His uppity parents played by Byron Jennings and Johanna Day visit the Sycamores on the wrong night and all comic hell breaks loose.

You can have the audience laugh just about every minute without resorting to overacting or farcical inanities. When the snobbish Kirbys arrive on the wrong night for dinner, the shocked Alice falls on her knees before Mrs. Kirby in a move that is exaggerated, uncalled for and unfunny. Alice has some class and Tony did not fall for some hick from Kansas. And this is a fine comedy, not a farce.

Kranz as her lover Tony has the bad habit in the early part of the play of turning his head towards the audience instead of talking to Alice.

Will Brill as Ed constantly and needlessly overacts to no good effect. James Earl Jones as Grandpa smiles a bit too much, even when he is praying. He can handle the role of Grandpa with his eyes closed, as they say, and I have no idea why Ellis has him smile so much of the time.

Reg Rogers as Kolnkhov should affect some kind of Russian accent but he seems unable to do much of anything. No one expects any verisimilitude but a strong accent with a Russian flavour would have been nice.

Halston as the drunken actress crawls up the stairs reciting a limerick. She brings the house down.

Elizabeth Ashley has the minor role of a Russian duchess who has fallen on bad times. She is a waitress in a restaurant in Times Square. Has the same fate befallen Ms Ashley - to play an almost walk-on role in a terrible accent and be almost a caricature of herself?

The revolving set by David Rockwell lets us see the outside of the Sycamore house as well as well as the interior where most of the action takes place. The interior is marvelously busy. The fireworks are quite spectacular.

The laughs were there but the play was simply downgraded several notches from the hilarious and witty comedy that it is.
_________

You Can’t Take It With You  by George Kaufman and Moss Hart continues until February 22, 2015 at the Longacre Theatre, 220 West 48th Street, New York, NY.  http://youcanttakeitwithyoubroadway.com/
Posted by James Karas at 6:12 PM