A DELICATE BALANCE – REVIEW OF REVIVAL OF ALBEE PLAY ON BROADWAY 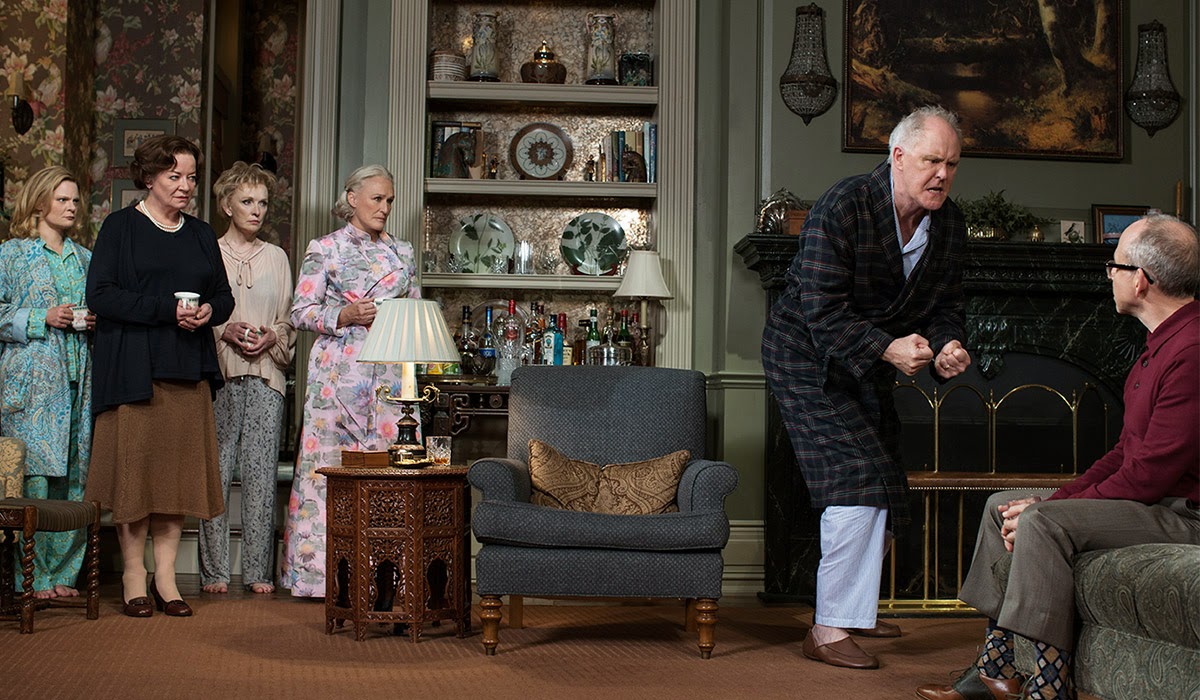 A Delicate Balance opens with the question of sanity. Agnes (Glenn Close), a woman in her 50’s, in a sort of reverie expresses her belief that she might lose her mind one day.  She is talking with her husband Tobias (John Lithgow) and the dialogue continues in that vein until they are interrupted by Agnes’s alcoholic sister, Claire (Lindsay Duncan).

A Delicate Balance is now playing on Broadway at the Golden Theatre in a deftly directed production by Pam McKinnon.

The play occupies an opaque space; a world where everything seems and should be normal but nothing is. The world of the play remains opaque manoeuvring between the incomprehensible and the mundane, striking a delicate balance between reality and unreality.

Agnes and Tobias are very well off and live in a beautiful suburban house. (Santo Loquasto’s set is gorgeous). They are a solid couple enjoying the fruits of success from the house to the well-stocked bar to the country club. Claire is a devout drinker who denies that she is an alcoholic and provides acerbic comments and considerable humour to the play. The two sisters hate each other.

Harry (Bob Balaban) and Edna (Deirdre Madigan) arrive unexpectedly and move in with Tobias and Agnes. We are repeatedly told that they are best friends and both couples accept that but what are the visitors doing in Tobias’s house and why are they there in the first place? Are they terrified of something or are they terror itself? Are they plagued by something or are they the plague itself?

This is the central question of the play. The two couples are best friends and Tobias and Agnes accept the fact that they must stand by their friends. Nerves get frayed, unpleasantness emerges but the core relationship and the obligation to help is never really questioned. But the central question is never answered. Are we still in the opaque world between soundness of mind and losing one’s moorings? Are we in that opaque world and holding onto a delicate balance?

We are treated to some superb performances by the cast of six actors. Lithgow gives a nuanced performance as the decent man caught in an impossible situation. He has to put up with Agnes who is getting frustrated, his sister-in-law who is crazy and his daughter Julia (Martha Plimpton) who comes home after breaking up with her fourth husband. The interplay between Claire and Julia and Claire and Agnes results in some wonderful humour. There is laughter even in an incomprehensible world. Julia provides some of the tension as well and eventually brings things to a head by going berserk.

Balaban and Madigan give solid performances as the lost couple. A special tribute is due to Madigan who took over for Clare Higgins and gave a splendid performance as Edna.

The play ends where it began with Agnes musing on the fact that one day she will lose her mind. She will not know if it happens and maybe it has already happened. She invokes light and the sun and it reminded me of Osvald’s last words in Ibsen’s Ghosts as he slips into syphilitic madness: “The sun-the sun.”
______