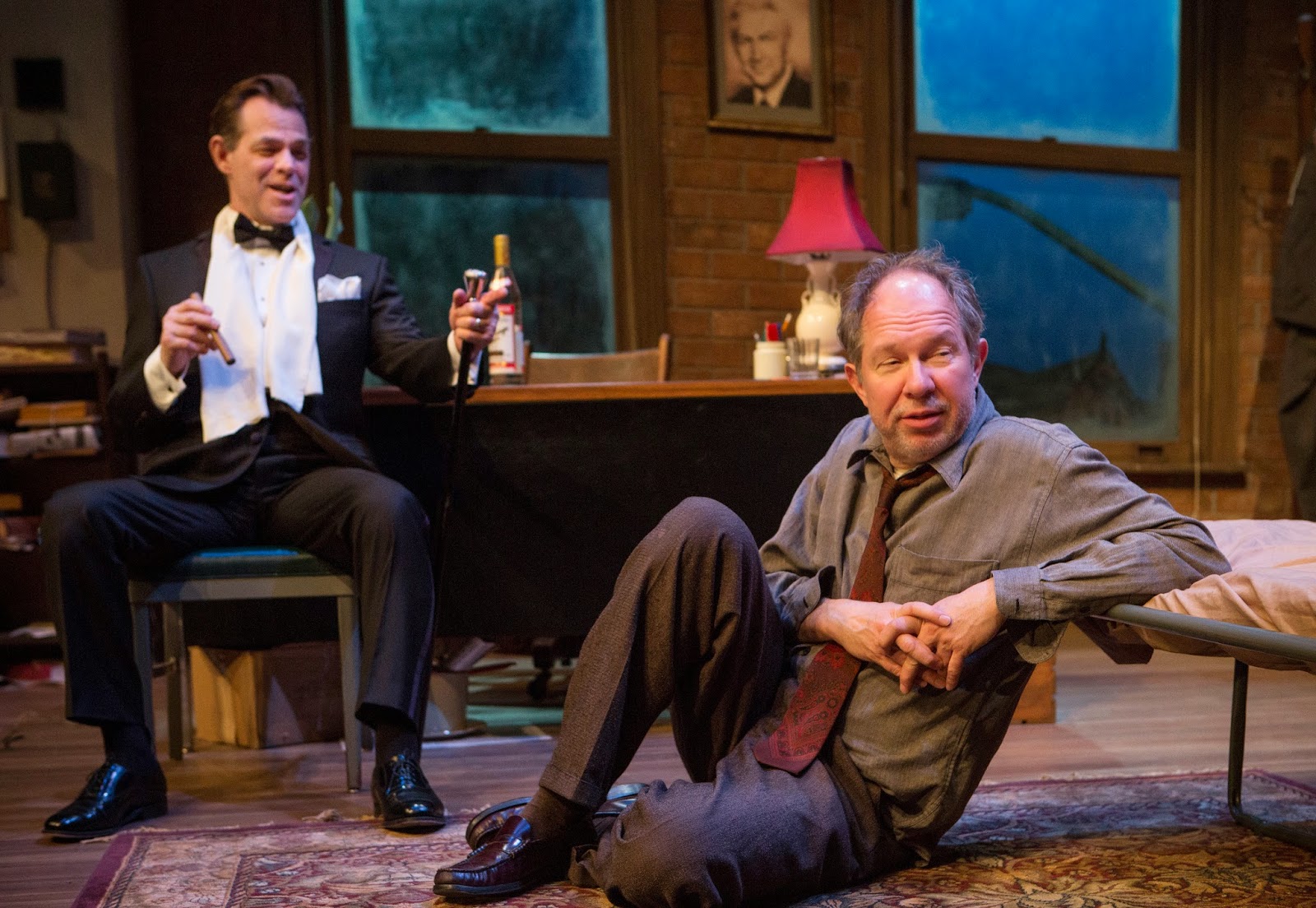 The Gigli Concert is a fascinating play whose characters live in a truly bizarre world. They exist between reality and their fantasies (with the latter predominating), between psychoses and sanity, and between alcoholic stupor and bouts of sobriety. Yet it is a world of intelligence, philosophical musing, religious references and some mundane concerns. And don’t forget the great Italian tenor Beniamino Gigli.

Matamoros takes on the tough role (he never leaves the stage) of JPW King – Dynamatologist. The word means nothing, of course, but it is supposed to describe some kind of movement or idea. JPW lives and works out of a dingy room that has a desk and a convertible couch. He is frequently drunk and is described as a quack and a charlatan. He admits that he has not achieved anything in his life but when an Irish Man walks in his office, JPW undertakes to makes him sing like Gigli in six sessions.

Matamoros has no difficulty bringing out the absurdity, irrationality and ridiculousness of JPW as well as of his thinking and philosophical side. But there is another side to JPW that does not come out very well. He is an upper-class Englishman living in Ireland and trying to imitate an Irish accent. He is a man who does not belong where he is in many ways, including as an Englishman in Ireland. Accents are not Matamoros’s strong point and you could not place him anywhere especially as a displaced Englishman in Ireland.

The Irish Man is a successful builder, well-dressed and just as looney as JPW. He wants to sing like Gigli and thinks that JPW can make him do it. His appearance of normality is superficial and the man belongs on a psychiatrist’s couch but he has no use for psychiatrists. Stuart Hughes has a gruff voice and his Irish Man is in turn aggressive, pathetic, wistful and just plain nuts.

Irene Poole has the smaller role of Mona. She is JPW’s mistress, a woman who seeks sex with men but who also lives in her world of fantasy. After giving birth to a child while still in her teens and having to give it up for adoption, she dreams of having another one. The three characters face reality in different ways but Mona’s encounter with it comes in the form of cancer.

Gigli’s voice provides a unifying theme to the bizarre world of the characters and we hear a number of arias. The Irish Man does not do a concert but JPW does get to perform as if he were Gigli even if it is in his dream.

Palk has a tendency of leaving her characters to stand in one place as if nailed to the floor for too long. Pacing up and down may not be the solution but some kind of stage business is preferable to standing in one place. That and the failure to establish the Irish-English milieu and tension are the main complaints about the production. Otherwise, Murphy avalanche of ideas in extraordinarily rich language and verbal dexterity is a treat not to be missed. As for Gigli, you will probably  end up on YouTube listening to his recordings.

The Gigli Concert by Tom Murphy opened on April 2 and continues until May 16, 2014 at the Young Centre for the Performing Arts, 50 Tank House Lane, Distillery District, Toronto, Ontario. www.soulpepper.ca 416 944-1740