Allan Hawco and Christine Horne in the bathtub in Belleville

The programme cover for Amy Herzog’s Belleville shows a man and a woman huddling in a bathtub. The play is described as Hitchcockian and you know that two clothed people in an empty bathtub is definitely a clue. You will have to go to the Berkeley Street Theatre to decipher the clue in this Company Theatre production.

That is assuming that you are still interested in the fate of some of the characters in the pay or you have not figured things out before the lights go out.  You may well consider the outcome as self-imposed and well-deserved social cleanup but that may disclose a nasty streak in your character.

Zack (Allan Hawco) is a doctor and his wife Abby (Christine Horne) is a yoga teacher. They are Americans who live in a nice apartment in Paris.

Alioune (Dalmar Abuzeid) is Zack’s friend, neighbour and landlord. Friend means they smoke weed together; neighbour means he lives in the apartment below; landlord means Zack has not paid rent for four months and Alioune will throw him out. Alioune’s wife Amina (Marsha Regis), a woman with some sense makes a couple of brief appearances. 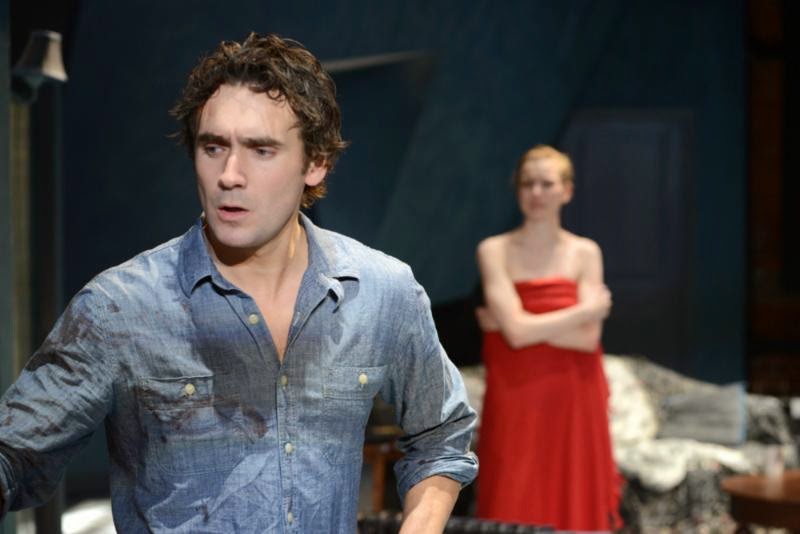 Director Jason Byrne has all the characters, except Amina, act as if they are uncomfortable in their own skin. Amina is angry and she too is finds out some unpleasant information about her husband. Zack and Abby fidge,t talk nervously and behave like people who have a great deal to hide including their psychoses which are quite obvious.

We are left with the flake that married the fraud and they are not sufficiently interesting to keep us concerned about them even for the ninety minutes that the play lasts. I think the audience should be fascinated by the people in the play, relate to them, like, them, admire them, despise them – some or all of the above. None of these reactions apply to the characters in Belleville.

Byrne and the cast strive to keep our attention to the plot but a play needs more than just a question mark about how the story will end. Herzog’s play has precious little more than a question mark. A good dose of humour would have helped but these people are too far gone even to be funny.

A flawed play with characters one cannot give a hoot about can have good acting and Hawco and Horne do get good marks for their portrayals of their respective losers.
______

Belleville by Amy Herzog in a production by Company Theatre in association with Canadian Stage runs from April 6 to May 4, 2014 at the Berkeley Street Theatre, 26 Berkeley Street, Toronto, Ontario. www.companytheatre.ca
Posted by James Karas at 9:57 PM