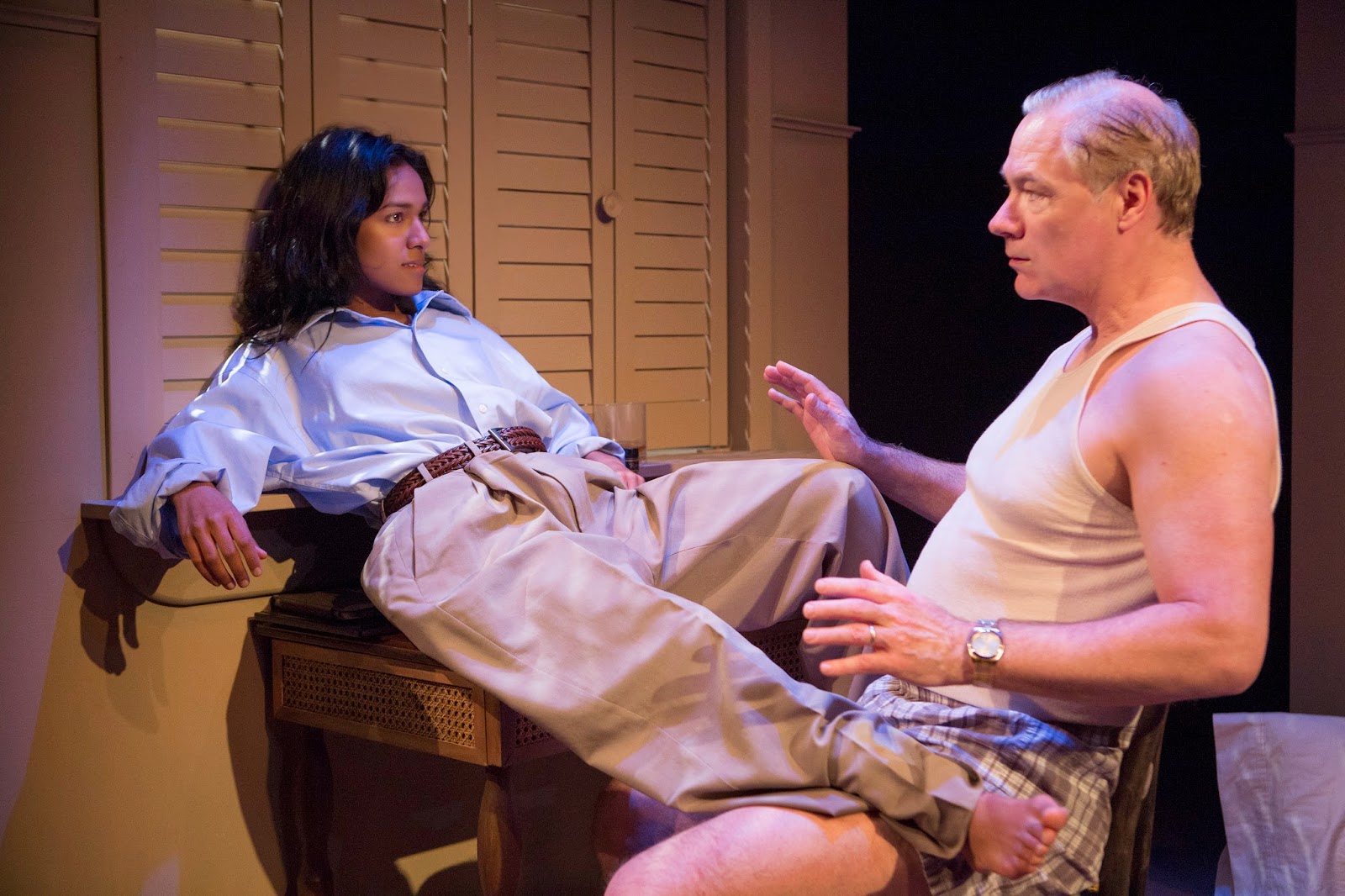 Child prostitution, especially in developing countries, has reached such levels that many countries have made it a criminal offence in the place of origin of the offender. Stories about men going on “sex holidays” in the Far East are common and prosecutions may be increasing but their effectiveness is doubtful.

Playwright Erin Shields has tackled the subject from an angle all her own in Soliciting Temptation which is playing at the Tarragon Theatre Extra Space until May 4, 2014.

A Canadian on a business trip to an unnamed country has made arrangements to meet a young girl in a cheap and sweltering hotel room. A shy, pretty girl arrives, wrapped in a see-through sari and wearing only panties and a top underneath. She says nothing and proceeds to unwind the sari from her body in a sexually suggestive manner. The man takes the first steps towards sexual contact and the girl explodes in his face like a hidden hand grenade.

She is no child prostitute but an intelligent, well-educated, self-assured and articulate young woman (we never find out her age) who was raised in Canada and has returned to her country of origin to fight child prostitution.

The positions of power are reversed and the man becomes a blubbering idiot begging for mercy. She shows none as she displays her own power. She knows his phone numbers and can inform his wife and daughter; she knows his employer; there are pimps protecting her and she can call the police.

The uneven battle stops when the girl is bitten by something and goes into anaphylactic shock. The man saves her life with a shot of adrenalin but the battle between them resumes. She goes on the offensive again and has him take off his puts and shirt. She puts them on, leaving him in his underwear. The man’s humiliation is complete.

The power struggle takes a turn when she admits that she is a virgin and somehow that provides an opening for the man to take the upper hand for a while.

The two actors, Derek Boyes as the man and Miriam Fernandes as the girl, are on stage throughout the eighty minutes of the play and they have their work cut out. They engage in highly emotional scenes, nasty arguments and some lyrical exchanges. They never falter and give superb performances. Director Andrea Donaldson does a fine job except for allowing both the man and the girl to reach dramatic heights a bit too quickly.

I have problems with the play. The situation is a set up to get a man who is by no means the worst sex tourist that one reads about. The plot is reminiscent of David Mamet’s Oleana where a hapless professor is set up in a power struggle by a student and is destroyed. I am not looking for another play by Mamet but Soliciting Temptation lacks inner coherence and convincing dramatic development. It reaches a climax quickly when the man is brought to his knees begging for mercy and the reversal of the girl’s behaviour is not convincing. There are times when the play simply creaks.

Soliciting Temptation is a good example of bringing a current issue on the stage but the play needs a few sessions with a talented dramaturge to be completely credible.
______

Soliciting Temptation by Erin Shields opened on April 9 and will run until May 4, 2014 at the Tarragon Theatre Extra Space, 30 Bridgman Ave. Toronto, Ontario.  www.tarragontheatre.com
Posted by James Karas at 5:38 PM