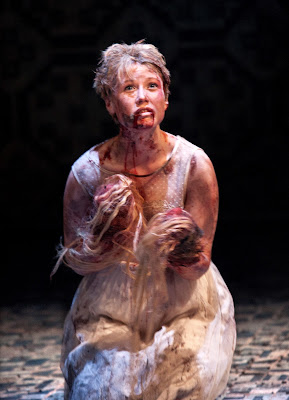 
The scenes: a woman is raped by two thugs and her hands and tongue are cut off; a man’s hand is cut off by a hacksaw; a man is sacrificially killed; there are numerous stabbings; dinner is served and the main dish is a meat pie filled with human flesh.


The assignment: Stage them.
No, this is not a black comedy but Titus Andronicus, a revenge tragedy by Shakespeare. It is now playing at the Swan Theatre in Stratford-upon-Avon in a production by the redoubtable Royal Shakespeare Company.


Director Michael Fentiman and Designer Colin Richmond have opted for a straight-faced reading of the play with mostly judicious choices that provide an effective and restrained production. With Titus Andronicus “judicious” can mean something as basic as not provoking giggling from the audience. They managed to avoid giggling almost completely.


The play is set ostensibly in ancient Rome but this production has a variety of elements that set it somewhere between ancient Rome and sometime in the future. Some of the men wear modern jackets and pants with an emphasis on black. There are some purple arm bands that, together with the black shirts, could be construed as Nazi paraphernalia. The Roman soldiers wear black helmets in a shape that made them look like people from some sci-fi movie. The Goth soldiers wear primitive attire. Titus and his sons wear burgundy officers’ jackets. Although there is a radio on stage, there are no guns, only swords and daggers. The play is thus set in no particular era and the design works.


Stephen Boxer is an effective Titus. He is mostly stentorian in the opening scenes but his character and his attitude change when he goes mad and regains his sanity later in the play. Many of the other characters in the play are mostly one-sided leaving scant room for development or introspection. However, Boxer delivers the goods.


Saturninus (John Hopkins) and Bassianus (Richard Goulding) are the sons of the late Emperor and they are vying for his job. There is not much difference between the two but Fentiman cleverly makes Saturninus a bit effeminate while Bassianus is the more macho figure.


Tamora, the Queen of the Goths (Katy Stephens) is an exuberant character from her begging for her sons’ life in the beginning of the play to her energetic embrace of evil throughout.


Aaron the Moor, Tamora’s lover, stands out for the sheer breadth of his evil. Kevin Harvey has one of those deep, rolling bass voices that is just a pleasure to hear. You do not want his Aaron as your neighbor.


Perry Millward as Demetrius and Jonny Weldon as Chiron make an impressive duo of remorseless thugs. They are the sons of Tamora and are outside the pale of morality as recognized by most people.


Worthy of mention is the performance of Richard Durden as Marcus Andronicus. He has a deep voice and displays gravitas among a lot of shouting and killing.


Lavinia, beautiful, blonde, dressed in white, is lovely to behold. She is Titus’s daughter who is raped and mutilated and Rose Reynolds is very good in the role. She does her best work after she is mutilated as she tries to identify her attackers.


What does the creative team do with the blood and gore? The first murder is the sacrifice of the Goth Alarbus (Nicholas Prasad). As his attackers descend on the victim, a trap door opens and they are all lowered below stage. The killers come up covered in blood, carrying a large bowl of Alarbus’s body parts. The same is done with Lavinia and she emerges covered in blood and mud. She spits out blood from her severed tongue. Her severed hands are stumps and she is one need hardly say a pretty pathetic sight. The irony is that the blood and gore are not all that gross.


The rest of the stabbings are fairly antiseptic if numerous. One scene does stand out and that is the severing of Titus’ hand. He must offer one hand as proof of loyalty and Fentiman has it cut off on stage with a hacksaw.


Titus Andronicus is part of the Shakespearean canon and is probably produced for that reason alone. It was very popular in its day but the 20th century held a dim view of it. Aside from its historic interest, the way a director stages those vile scenes peaks one’s curiosity. Do we get enough revolting detail or are we left disappointed?


This production has its good points but in the end making meat pies with human flesh is just not what it used to be.
___________


Titus Andronicus by William Shakespeare opened on May 23 and continues in repertory until October 26, 2013 at the Swan Theatre, Stratford-upon-Avon, England. http://www.rsc.org.uk/
Posted by James Karas at 12:43 PM