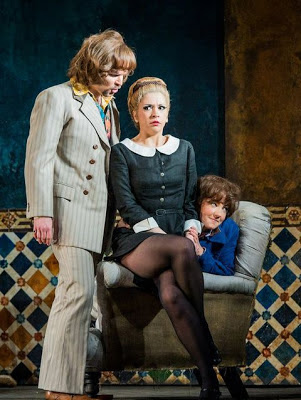 The Count, Susanna and Cherubino in The Marriage of Figaro - Photo: Robert Workman
Reviewed by James Karas

Figaro has moved his marriage to Susanna to the 1960s.


The Glyndebourne Festival has revived its 2012 production of Michael Grandage’s staging of The Marriage of Figaro set in the hip decade of hot skirts, marijuana, long hair and other long forgotten habits and fashions.


Grandage’s production has some delightful aspects, some great theatrical touches but his conception is not without its problems. Life in a castle in Seville a couple of hundred years or so ago poses some challenges when trying to marry it to the 21st century. I will have more to say about that in a minute but first let’s talk about the singing and acting.

For several good reasons, top honours for performance go to soprano Laura Tatulescu as Susanna. She sang with verve, joy, beauty and energy. She acted the same way and gave a Susanna that is a delight to watch and listen to. She can be quite physical in her falls and tossing of her legs in the air and is a woman who can stand on her own two  feet in any century.

Bass-baritone Adam Plachetka was an outstanding Figaro, tall with a resonant voice he made a comic and enjoyable partner for Susanna and  an adversary for Count Almaviva.


Soprano Amanda Majeski made a majestic and gorgeous Countess. The singer gets two wonderful chances to display her vocal splendour and the heart-rending condition of a woman spurned by an unfaithful husband. Majeski’s “Dove sono” and “Porgi amor” are feasts for the ears and the eyes as the beautiful soprano pours out her distraught emotions in lustrous tones. 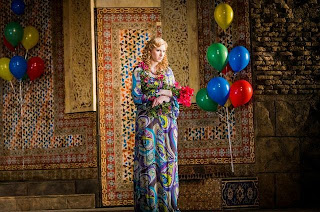 
Partially because of Grandage’s conception for the production, there is a problem with the rendition of the role of Count Almaviva. This Almaviva is a superficial dandy with long hair who smokes pot. If you imagine the Count as being imperious and commanding (like Dietrich Fischer-Dieskau doing it, say), you will not find him in this production. Canadian baritone Joshua Hopkins acts the part as directed and sings it in a like manner. He sounds like a shallow, fun loving creature which is quite incongruous with the character that he is playing or, perhaps more accurately, the character we know from Mozart’s opera.


During the overture, a convertible sports car arrives and the Count and Countess alight. They are returning from their honeymoon. (They could have been out shopping but I prefer my view). A gardener places a flower pot under a window and we know that it will come in handy a bit later.


Susanna and Figaro roll happily on the floor in the opening scene and when she ends up on top of him she feels something hard and jumps up. It’s only the measuring tape in Figaro’s pocket. These are some of the fine touches that Grandage adds to the production that help define and humanize the characters and entertain the audience.


The set by Designer Christopher Oram seems to be intended to make no impression at all. Are we in a rich castle, a modern house or what? Did I detect Middle Eastern décor?


Not all the issues of the change in era were resolved satisfactorily but that barely affected this thoroughly enjoyable production.
____


The Marriage of Figaro by W. A. Mozart opened on June 8 and will be performed on various dates until August 2, 2013 at the Glyndebourne Festival, East Sussex, England. www.glyndebourne.com
Posted by James Karas at 4:47 AM